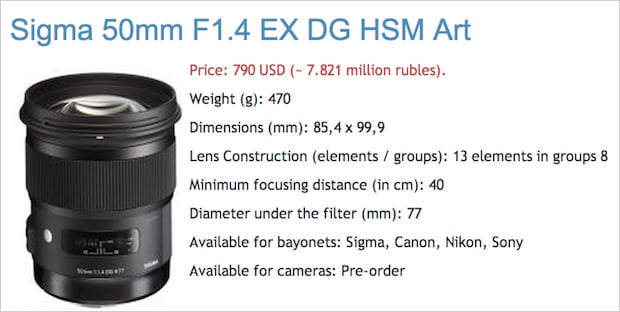 Rumors regarding the much-anticipated Sigma 50mm f/1.4 Art lens have been coming in hard and fast. Touted by Sigma itself as a ZEISS Otus competitor, people are not just interested in seeing if it can perform on that level, but in how much that kind of performance will cost. If it’s far enough below the Otus’ substantial $4K price tag it’s safe to say it will fly off shelves.

So far all we’ve had is estimates and speculation, but today, Sigma’s official dealer in Belarus, Sigma.by, has actually posted a price. We still recommend you take this with a grain of salt, but the price posted by Sigma Bielorussia is an insanely affordable $790! Read it for yourself on the Sigma Bielorrusia page here (translated here).

We have no more info than that, but keep checking back and we’ll be sure to update you just as soon as official pricing and availability are announced.

(via Sigma Rumors via sonyalpharumors)

LifePrint: The Wireless, Social Photo Printer that Prints Your Smartphone Snaps from Anywhere