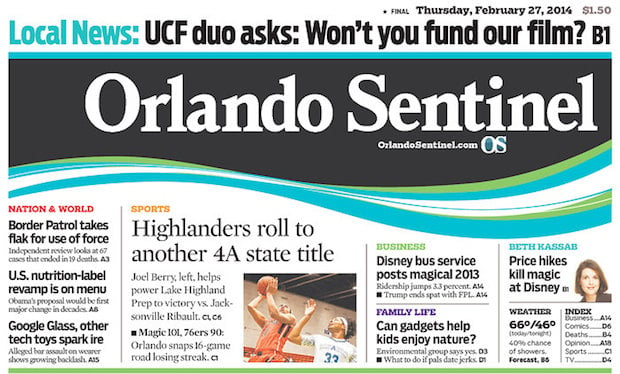 Earlier this week, the photography staff of the Orlando Sentinel in Florida was pulled into a meeting in which they were told that their current jobs are disappearing, and they will need to apply to new more ‘videocentric’ positions by tomorrow, Friday, February 28th.

The news is being reported by the National Press Photographers Association (NPPA), who was told directly by one of the affected member of the Sentinel’s staff.

According to the NPPA’s source, on Monday, the staff was pulled into a meeting with Todd Stewart — the newspaper’s design, graphics and multimedia editor and a man who had never met with the photography staff before that day. In that meeting he explained that their jobs were effectively gone, and that the would need to reapply for a new set of positions that will focus on creating more video content for the newspaper’s website.

The silver lining, if there is one here, is that these positions are only available to internal applications, so the staff photographers who are losing their jobs won’t have much competition for the new positions.

The newspaper’s management believes that increasing the amount of video on the website will help to increase readership/viewership… we have our own opinions regarding the wisdom of sacrificing still photography jobs in order to do this. For more info, head over to the NPPA website and read the full report. And, as always, drop us a line and let us know what you think in the comments down below.

Get Educated: Recommended Projects and Tutorials

Can the Nikon D800E Hold Its Own Against The Hasselblad H5D-40?