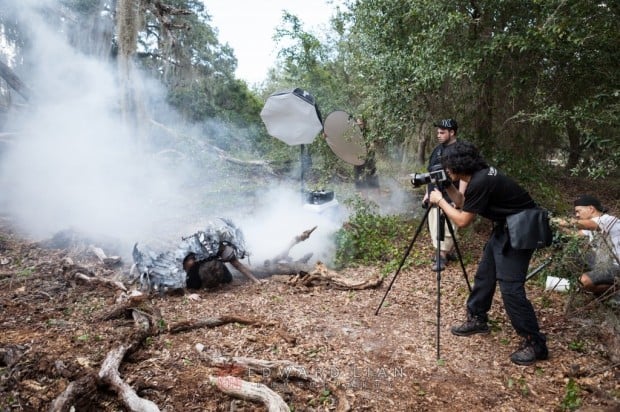 What happens when you pit Nikon’s $3,000 D800E up against a $30,000 Hasselblad H5D? Well, photographer Benjamin Von Wong — whose work we’ve featured quite a bit here on PetaPixel — got to do just that in a friendly comparison.

The opportunity came about when BorrowLenses let Ben try out the Hasselblad H5D-40 and a set of Elinchrom Ranger Quadras for his “Fallen Angel” photoshoot, a project which has an interesting story behind it in and of itself.

Excited to play around with the medium format beast and pit it against his favorite workhorse camera body, he got to work and shared his conclusions in a post over on his blog. 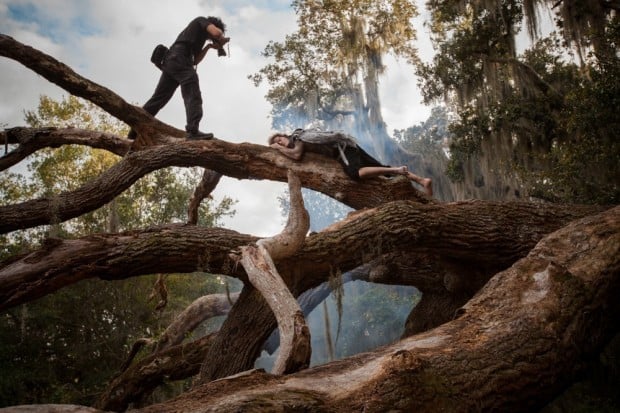 To briefly summarize his thoughts on the experience, he basically reiterates what most of us would probably conclude: the H5D impressed Ben in many regards, but it wasn’t without its typical medium format faults.

First the positives. The True-Focus system of the H5D made a positive impression. Also, a bit to his surprise, the lower frame rate and overall slower workflow of medium format ended up drawing him in.

“I’ve been looking to pay more attention to details,” writes Ben. “So slowing down wasn’t a big bother to me, and the fact that I could sync the camera past 1/250th (even though I never ended up needing it in this particular shoot) meant that I’d get more power out of my small little ranger packs while maintaining a shallow depth of field.”

Where the H5D fell noticeably short was in the ISO performance. Ben notes that anything past ISO 400 picked up grain extremely fast, and the autofocus ended up being borderline useless once the sun was down.

Understandably, he didn’t make say much about the D800E in way of a direct specs comparison, noting that these “are two different classes of camera,” each owning their own strengths and downfalls.

In the end, Ben concludes that while he does dream of owning it one day, at $27,000 more expensive it’s much more sensible (at least for him) to rent a medium format camera on those occasions when it’s capabilities are needed than it is to actually own one.

Of course, words can only tell you so much, and so Ben was sure to provide plenty of visual evidence for you to parse through at home. We’ve included those images below so that you can take a look for yourself and see if you can tell which image is from what camera. (We’ve included an answer key at the very bottom so we don’t spoil your fun while you’re browsing through them).

In my own opinion, the differences are rather obvious. No matter how well the D800E’s sensor performs, you can’t bend the laws of physics. The increased size of a medium format sensor (or negative) will always allow for a much smoother, more aesthetically pleasing bokeh when you compare the results against a full frame sensor (or 35mm film).

If you’d like to take a look at the unique story behind this awesome photo shoot, be sure to head over to Ben’s blog and check out the wonderful write up and behind the scenes video included there. And if you want to read Ben’s thoughts on this comparison for yourself, you can find that blog post here.

Orlando Sentinel Tells Photographers Their Jobs are Gone, Will Need to Reapply for New ‘Videocentric’ Positions

Group Sneaks Camera into Supreme Court, Gives Us First Ever Glimpse Inside