It’s a good day to share a nerdy photographer love story, and Greg Wlosinski and Lindsay King‘s story certainly fits the mold. And what’s more, Greg was able to document the couple’s recent proposal in a creative stop motion video inspired by a few posts he read right here on PetaPixel.

Greg and Lindsay met four years ago through a mutual friend. She was finishing up a Photojournalism program at Corcoran College of Art + Design in Washington, D.C. He was living in Buffalo, NY. They both loved travel and photography. A long-distance relationship ensued.

After a year of alternating trips to see each other, the couple gave up fighting destiny and Greg moved down to Washington, DC to be with his sweetheart. 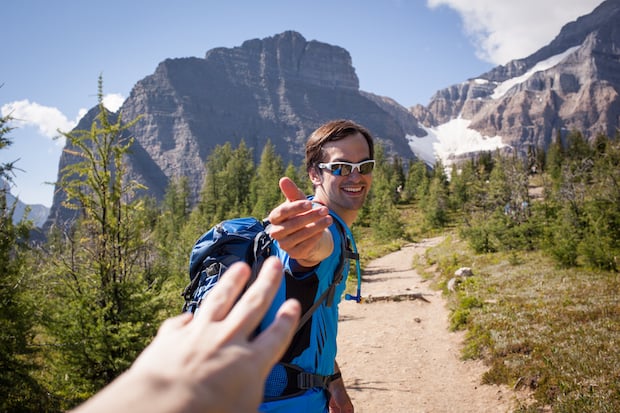 Skip forward to August 2013, and Greg is trying desperately to figure out how he’s going to propose to Lindsay. They’d been together long enough and he had actually bought the ring months in advance, but he had no idea how exactly he was going to propose until they came up with the idea of visiting Banff National Park in Canada.

The proposal itself happened on top of Fairview Mountain on August 10th, during a six and a half hour, six-mile round trip hike. And when they got home, they combined the almost 2,000 photos they took with their 5D Mark IIs to create the video above — a touching photographic chronicle of one of the many journeys they’ll take over the course of their lives together. To find out more about the video and the gear they used, or if you want to see some of Lindsay’s work — she’s the photographer, he’s the photo assistant and graphic designer who helps make sure her site looks awesome — check out the video on YouTube or head over to Lindsay King Photography by clicking here.

Image credits: Photographs by Lindsay King and Greg Wlosinski and used with permission.

Tutorial: How to Remove Location Info from Your Images in Photoshop