The video above was created for Brooklyn couple Monica Nikchemny and Felix Komrash when they got married back in September of 2012. It’s only a short preview video (a longer version is included bellow) but you can tell that wedding videography company Visualaz did a great job putting together a memorable wedding video.

So why, then, is the couple suing Visualaz for a whopping $50K?

Apparently, even the video below is only a “trailer.” The final video, which Nikchemny and Komrash only received recently, is so ‘ridiculous’ — the couple claims it is full of sitcom-like sound effects — that it supposedly sent the bride into hysterics.

“[The wedding video] sounded like I was watching an episode of ‘Seinfeld’ with the sound effects in the background,” said Nickchemny. “I was hysterical. I almost had a nervous breakdown.”

And that’s not all Nikchemny is accusing the production company of falling short on.

In court documents filed with the Brooklyn Supreme Court on Wednesday Feburary 5th, Nickchemny accuses Visualaz — a company whose founder, Igor Boshoer, is credited with visual effects work done for the Scorsese film “The Wolf of Wall Street” — of showing up to the wedding with only a fraction of the gear agreed upon, missing key moments in the ceremony such as the signing of the Jewish marriage contract and various toasts, and creating a video that upset the now-pregnant Nikchemny so badly it caused ‘medical complications.’

The suit also claims that Boshoer tried to have Komrash dress as a woman for a special ‘love story’ video the couple wanted, going so far as to threaten not to do it at all when the couple refused and suggested a “Coming to America” themed video instead.

And so, for all of these transgressions and more, the couple are suing Visualaz for $50K, which includes the contract fee plus tens of thousands in damages (the official number keeps changing, but a quote from the couple’s lawyer indicates that $50K is the correct number). 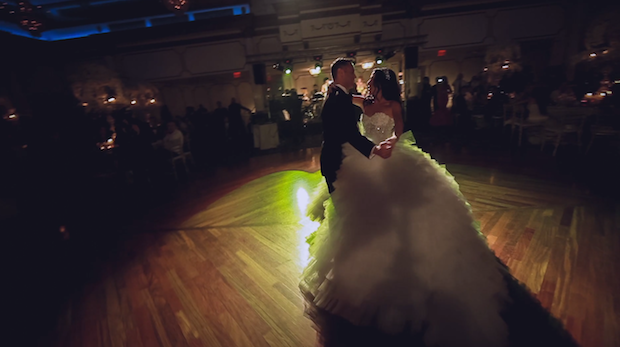 For his part Boshoer is refusing to comment on the matter. “We would love to tell our story, but not allowed to make any comments at this time,” he says. “The cinematography in their video should speak for itself. As soon as this is over I will update everyone.”

Several readers actually sent us this tip yesterday suggesting that we cover the story as a case of “unrealistic expectations,” given the quality of the other videos produced by Boshoer and his team. What do you think?

Unfortunately, we don’t have the full wedding video to show you, but given the accusations being leveled at Boshoer and his company, do you believe the couple is entitled to the tens of thousands they’re asking for? Or is this whole thing being blown out of proportion?