In the last days I received multiple requests to translate my posts for foreign readers, as they have very limited information about the happenings in Ukraine. This material describes events which took place in Kiev on January 22nd and 23rd.

Sharing and distribution is appreciated. 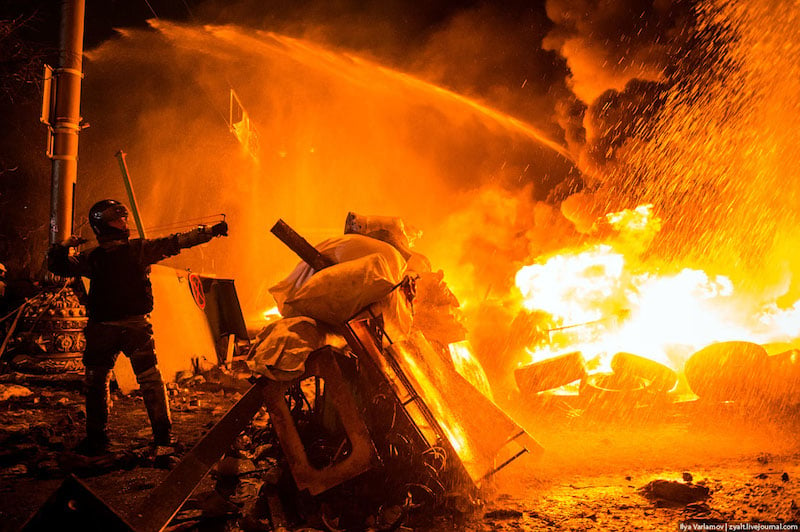 I came to Kiev. I came to see for myself what is happening here. Of course, an hour after arriving at Maidan, you begin to understand that everything what you’ve read in dozens of articles, saw in TV news reports is total crap. In the upcoming reports I will try to, as objectively as possible, to sort out this new wave of Kiev revolution.

Usually reporters try to answer the question: “Who came out to Maidan and why.” Depending on the political leaning of MSM, the answers are different. Some say it’s “fascists who came out to lynch the Moscali (Ukranian derogatory for Moscovites and Russians in general).”, some say “they’re bums and slackers, who’ve got nothing better to do” and “instigators on the government payroll.” In reality, there is no answer. Those who came out are completely different. Remember, how a couple of years in Moscow there was a MSM buzzword “angry townspeople.” Here you see football fans, retirees, office plankton. And everyone is standing together. A sweet, ol’ grandmother is pouring Molotov cocktail in a nationalists’ bottles; and a manager of a large company is carrying ammunition to the student. And as it seems to me at this time, these people do not have a specific plan, nor idea of what to do next. Of course, individually, everyone has their own plan to “save Ukraine.” For some it’s “we need a couple of crates of AKs and grenades, we’ll sort things out here quickly.” Others “need to ask the world community for help and bring in the UN troops.” At this time there is no central idea of what to do, an idea that can unite and point in one direction the people at Maidan.

The only thing that is completely clear – people came out against Yanukovich.

The burning barricades are visited by people who have come to let out anger and resentment that have accumulated over the years – for the excesses of cops; for the corruption; for the ‘golden toilet’; for the stupidity of the sell-out officials. An elderly man, 80 years of age, walks up to young guys in masks and asks them for a bottle of flaming liquid. They ask him:

“- Grandad, you wont be able to throw it far enough!
– Just give me one, I want to show these beasts that they cannot treat me like this”

Unfortunately, the Ukranians had bad luck with opposition. The street mob is not controlled by anyone. Klichko and his company met with Yanukovch yesterday. Later they came out to the people, began to say something, but no one believes them. And no one wants to follow them. The main mass of people are completely non-political. They come out to kick Yanukovich and his company’s ass. Everyone has their own grievances and vision of the future.

There are very real battles on the streets of Kiev right now. Unfortunately, Yanukovich is far, so the Berkut (Ukranian SWAT) and soldiers have to play the role of Yanukovich’ ass. The scenery in Kiev is scary. Black smoke, burning barricades and constant explosions. Berkut’s flashbangs and the protestors’ fireworks explode in the streets. Each side is shooting at the other and there are already first casualties(2 to 5 based on different sources).

Let’s go to the barricades?

I rented a room in the hotel “Dnepr”, the very center on the European square. I come up to the main entrance, all doors are locked, lights are out. A group of men in helmets and protection, hanging nearby, greet me “Welcome to Kiev, Mister.” – they’ve confused me with a foreign tourist. Everyone’s laughing. It turns out that the entrance to the hotel is through a local bar. The security guy opens the door and leads me through dark hallways to the lobby. The lights are off, so as not to attract attention. After all, the hotel is almost at the front line. 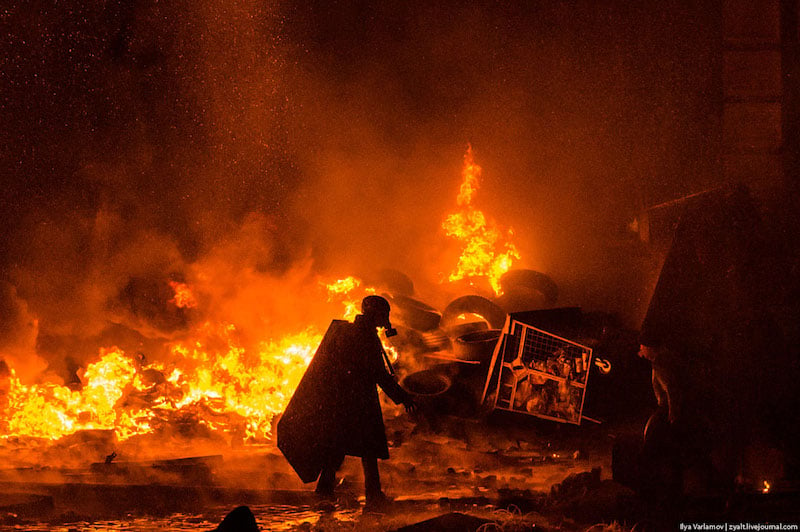 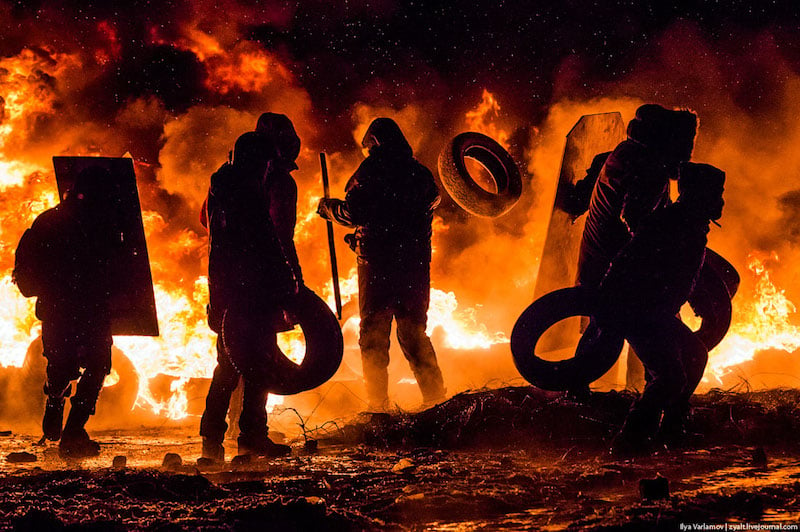 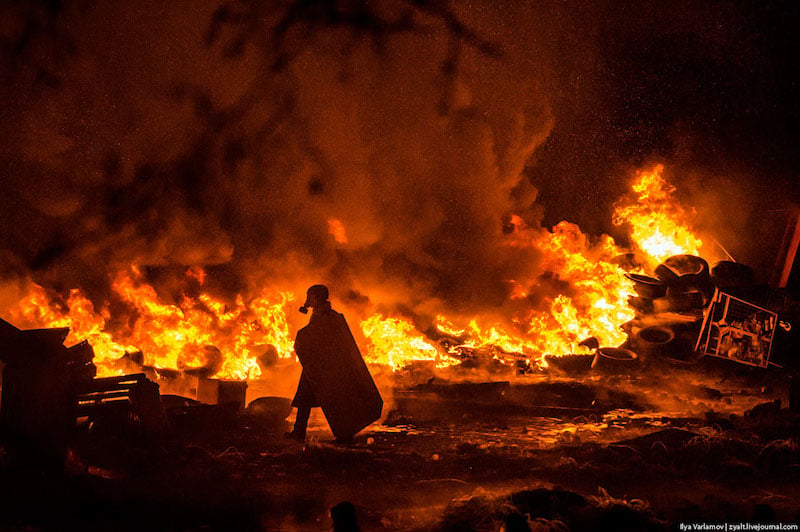 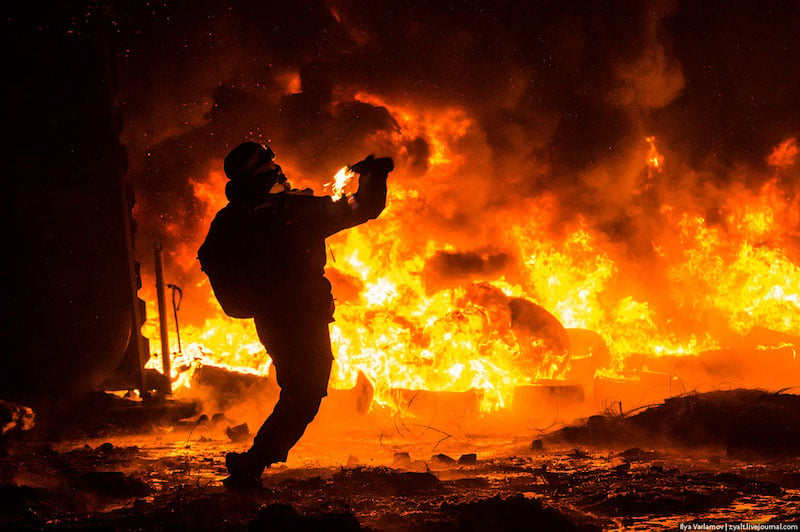 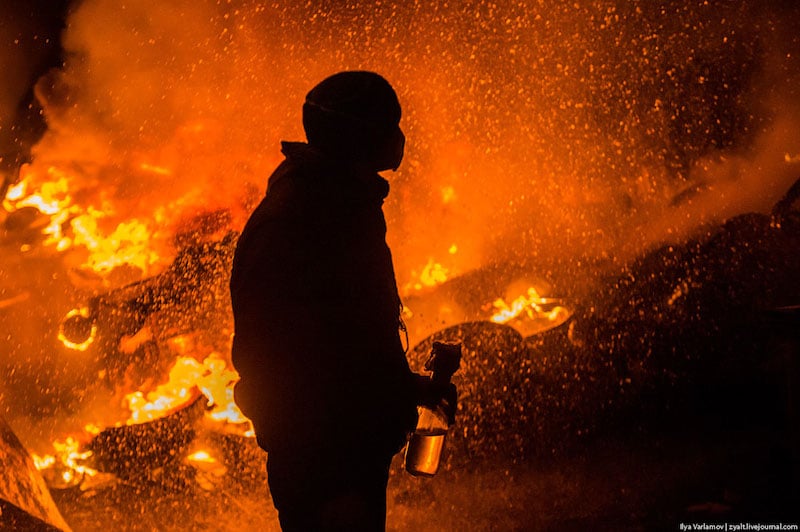 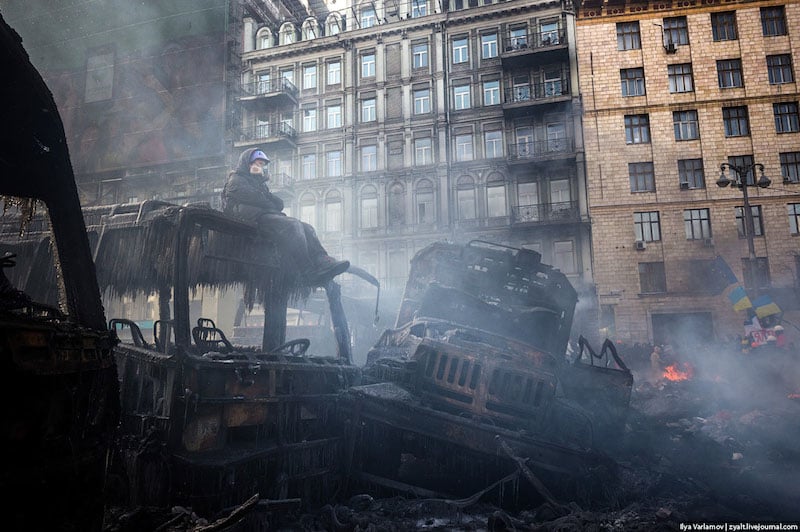 I would like to dispel the most common myths about Maidan.

1. “They destroyed the whole city”

Not true. All of the action you see in the pictures are happening on a small square near the entrance to a Dinamo stadium. This is a government sector, there is no interference in peaceful life outside of this area. If you make an analogy with Moscow, imagine that the barricades are someone in the area of Ilinka or Varvarka, near the president’s administration. Sure, it’s the center, but regular Moscovites wouldn’t notice. There is dark smoke and fire on all pictures: those are mostly burning tires. There is not tangible damage to the buildings. Unfortunately one store burned down last night near the barricades, resulted from a poorly thrown molotov cocktail. Even the statue of Lobanovsky, located in the epicenter of fighting has been covered with cloth to prevent damage. Overall, the protesters are very careful regarding property. They’ve taken apart fences and benches, but no windows are broken, no one is vandalizing, and all looters are caught and beaten. So the picture is pretty apocalyptic, but things are not so bad.

2. “This is not a revolution, nothing horrible is happening”

Also not true. This is a real revolution. Decide for yourselves: it’s been two months since the center of Kiev has been in the hands of the opposition. Several government buildings are seized. The work of many government offices is paralyzed. The opposition has created barricades, which the authorities have not be able to take. Despite the freezing temps, tens of thousands of people are on the streets for the last two months. The system of defense and supply chain are established. There is perfect order at the protestor HQ, people are fed, dressed, people are pooling money to gather supplies. The most important thing: the people in power are unable to restore order. The police has failed several times at try to storm the barricades. I’ll make a separate post about this, but trust me, the only way to dismantle this is with heavy artillery, or drop in commandos. Every day the opposition is securing more territories. What is this if not a revolution?

3. “The entire Kiev is paralyzed, there is no peaceful life for the regular people.”

Kiev is living its own life. All stores and cafes are working, people are going to work, study in universities, get married, divorce and even die their own death. Most of the Kiev populace are not inconvenienced. Imagine if Navalny took over the Red Square and set up his camp there. What would change for you, Moscovites? Nothing. So the only people who are inconvenienced are tourists. A few stores and cafes had to close down in the very center. Also, those living in the center have troubles with logistics. But the entire Kiev is not paralyzed.

Now, when you know all the truth, let’s see how this day was. 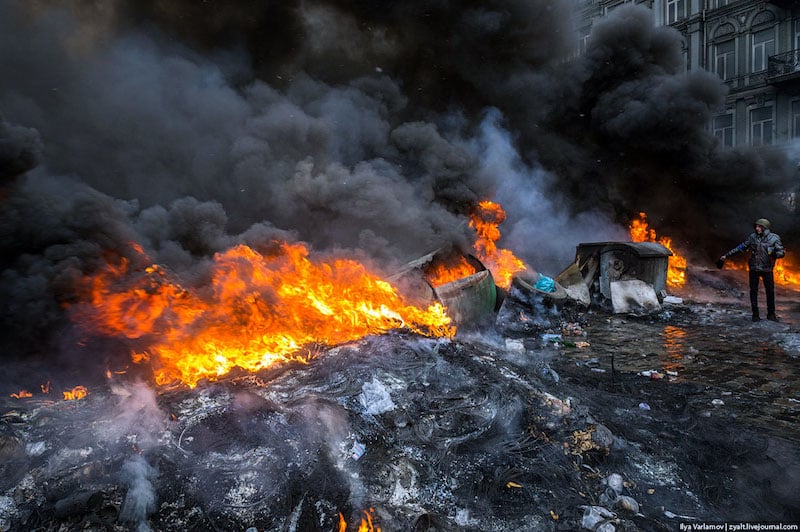 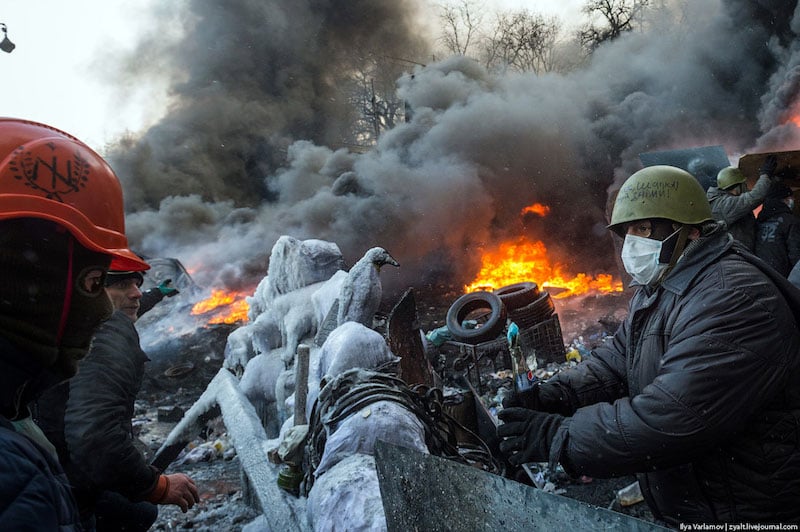 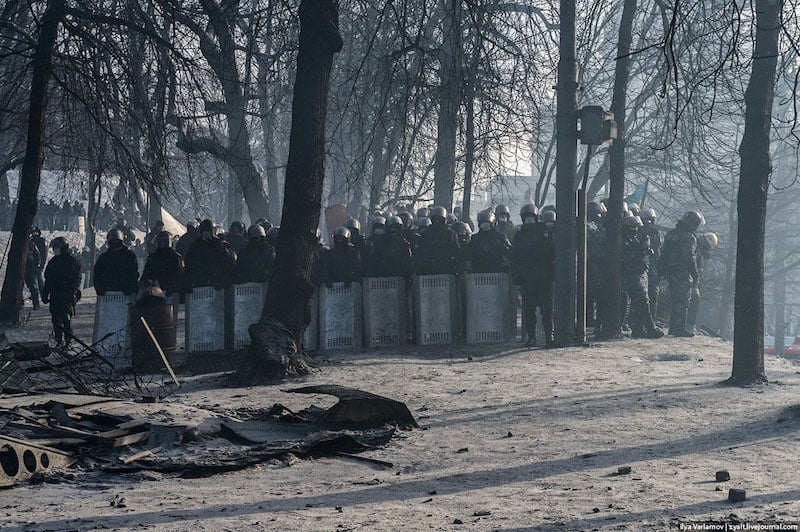 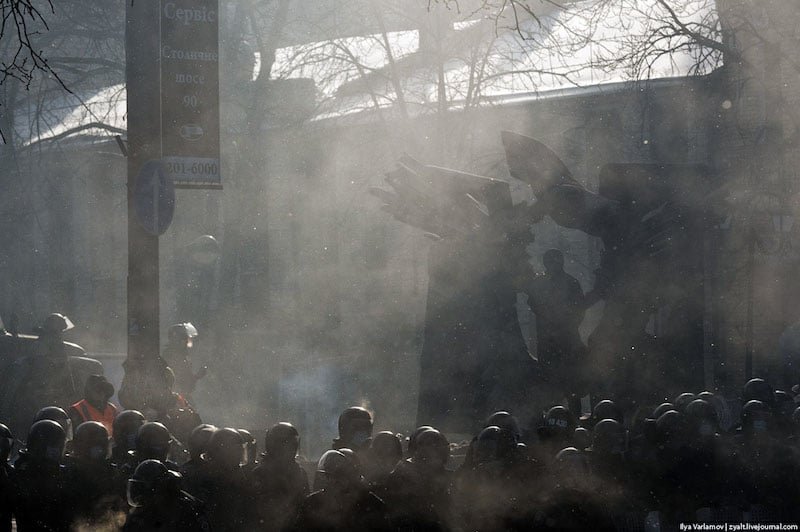 If you are a foreign journalist, feel free to reprint on your website or in your newspaper with reference or indication of authorship, and please let me know by sending the link to [email protected]

About the author: Ilya Varlamov is a 30-year-old russian blogger, photographer and traveller. Graduated in architecture, he now covers the most important and relevant events in Russia and around the world on his blog where he offers an independent opinion to his readers of what is going on. Ilya is also a co-founder of fund “Urban projects” which studies urban geography and cities’`livability. You can see more of his photography on Flickr. This article originally appeared here.

DxOMark Put the Lumia 1020 to the Test as a Dedicated Camera, See How it Performed