When it comes to major Photoshop alterations, serious news organizations have a zero-tolerance policy, as AP freelance photographer Narciso Contreras recently discovered. After admitting that he had cloned out a piece of a Syrian conflict image, the news agency was forced to ‘sever ties’ with the Pulitzer Prize winner.

The photo in question was taken in September of last year, and shows a Syrian opposition fighter taking cover during a firefight with government forces. In the original, a colleague’s camera can be seen in the bottom left corner of the image, a camera that Contreras decided to clone out before sending the picture in.

The revelation led to a massive investigation during which the AP pored over all 494 images that Contreras had submitted since he began working for them in 2012, and even though no other instances of alteration were discovered, editors still decided to give Contreras the boot. 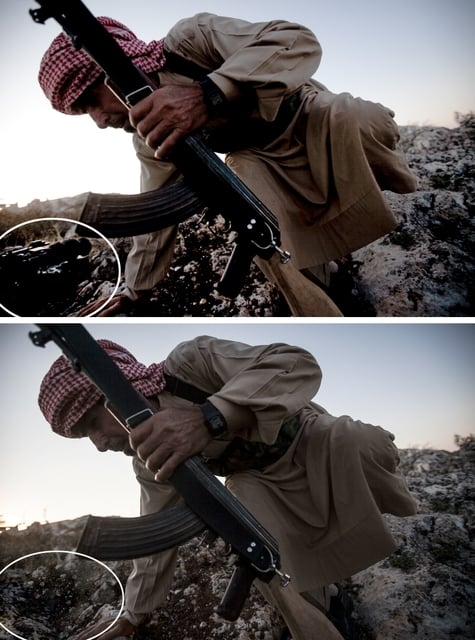 “AP’s reputation is paramount and we react decisively and vigorously when it is tarnished by actions in violation of our ethics code,” said AP Director of Photography Santiago Lyon. “Deliberately removing elements from our photographs is completely unacceptable.”

For his part, Contreras realizes that what he did was wrong. “I took the wrong decision when I removed the camera … I feel ashamed about that,” he said in an AP article. “You can go through my archives and you can find that this is a single case that happened probably at one very stressed moment, at one very difficult situation, but yeah, it happened to me, so I have to assume the consequences.”

To learn more about the situation, click here or here to read both of the AP articles on the incident.