The Fujifilm Instax Mini 90 might just be that unusually sexy gem that will intrigue the masses and add a dash or two of fun into your photography. A camera that is going to have clients talking and friends gawking.

The one thing I love to do when dealing with clients of any type, be it commercial or wedding, is have something to show off and perhaps surprise just a tad, topping up their waning focus throughout a full day shoot. Occasionally a simple fisheye lens will do the trick.

The Fujifilm X100 did the job when it first launched, conjuring many a “what is that?” and “ooh that looks so cool” with people. Like some of the other party tricks photography can be known for the X100 was a great conversation starter and it shot a great photo too. 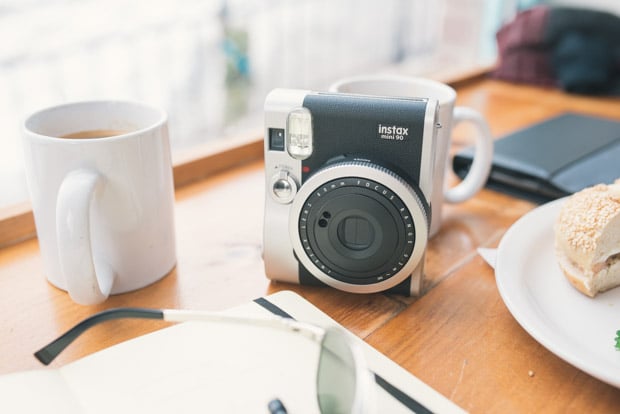 But nothing thrills people more than film. It is a phenomenon that continues to grow the more film itself continues to fade. What better way to blend the desire for immediate results with the olden days of film than via the Instax Mini 90. Yes you can shoot digital, chimping to see immediate results, but people — this guy included — love to watch an instant picture come in. Developing from nothing to a picture before their very eyes, “Back To The Future” style.

When Fujifilm first announced the Instax Mini 90 near the end of this summer I wanted to pre-order right away. It hadn’t quite launched in North America yet but in the meantime they could be had via fleabay for a lot more than retail. I almost bit. I was close, at least twice. But patience and my bank account’s loud shouting (in the voice of Fran Drescher no less) won out and I held off till the official North American release. Was the wait worth it? 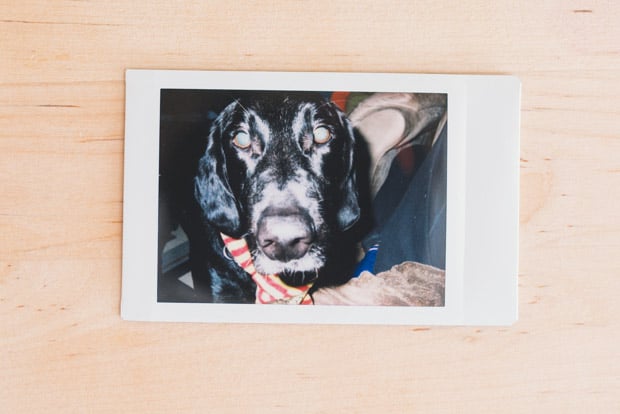 Nearly the size of an old school Sony Walkman, the aesthetics of the Instax Mini 90 are quite eye pleasing. A classy wrap of faux leather book-ended with the unmistakably token Fuji silver lid and base.

Though it’s 99% plastic it’s important to remember that it weighs just over 300g when including the battery. There are moving parts — so it’s not indestructible — but when the inevitable call of gravity kicks in, seeing your Mini 90 off to a downward tumble, one would hope that after a bounce survival is had. It’s a well packed little box with a spot on feel when held correctly. More on that shortly.

It’s also light enough to toss in your shoulder bag or jacket pocket and literally forget about. As I did… on several occasions… one of which almost resulted in an impromptu demonstration of its ability (or inability) to survive a washing machine. 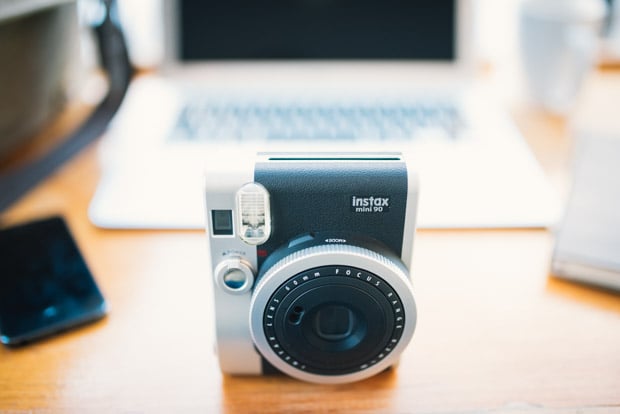 In the hand it’s good news bad news. Hold it oriented for portraits and it’s perfect. Hold it for landscape and you will want to get in and out as quick as possible.

Frankly if the strap mounts, tripod thread and rear thumb rests are anything to go by (as well as Fuji’s own sample photography) then it’s really meant to be shot portrait 99.999% of the time. It does have dual shutter release buttons but the one attached to the power lever is what you will use most. 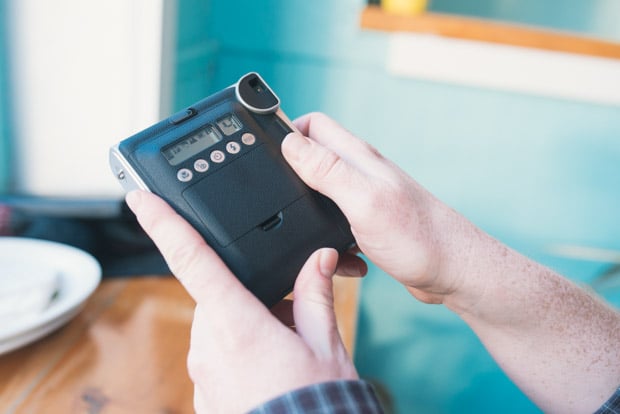 Ability is pretty standard for a Fujifilm Instax camera. The flash is more than capable and “Party” mode allows for background compensation when shooting in dark scenes — thus still giving you some background definition without blowing out the foreground. Its macro mode works as it should and “kids” mode is great for snagging a solid snap of Timmy riding that new bike.

It also offers the ability to over and under expose the shot via the Light and Dark button, offering 2 over and 1 under. Finally, you can do double exposure and bulb mode for those moments when you really want to explore the limits of Instax photography.

The learning curve is virtually zero. It might take a box or two of film to get a feel for which modes work best in certain scenarios but from then on it’s smooth sailing. 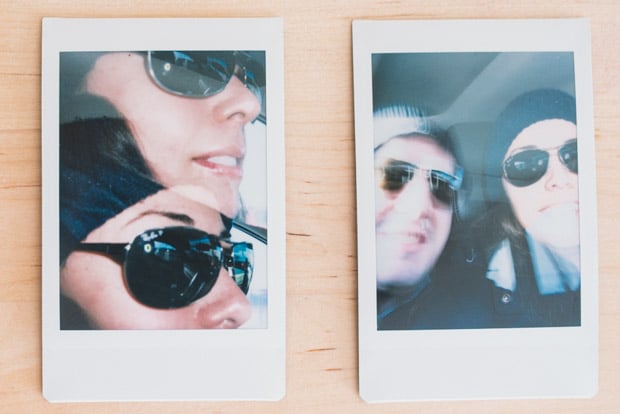 What I didn’t like? Aside from the grip when shooting in landscape there isn’t much not to like. The silver “mode” rocker at the base of the lens is somewhat redundant, as you still need to refer to the back and the un-backlit LCD to confirm which mode you’re in. So why not just press the mode button at that point?

Visually it rounds out the look of the Mini 90 but it could easily have served another purpose, such as flash on or off. If it were complimented by an LED near the viewfinder for clear indication of your flash status, the lens rocker would have a worthwhile purpose.

Lastly, the viewfinder doesn’t appear to be made for actually looking through, especially if you wear glasses. In a rush I found it quite tricky to correctly line up the Micro SD sized viewfinder. Could it be better? Certainly. Does it matter? Nope.

The lone circle in the middle acts as the only guide for which to align your shots. It’s field of view is significantly larger than the frame it’s about to spit out so that after a few hours of use it really becomes quite easy to shoot from the hip.

For $199 it’s a true point and shoot. Twenty shot boxes run from about $10 to $15 and even though the results might be ridiculously awful, that’s half the fun! 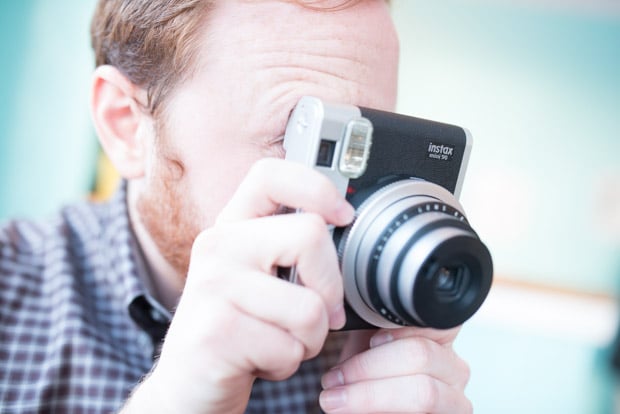 Busting those winter blues isn’t always easy but break out the Mini 90 at the Alpha Kappa Alpha kegger this weekend and those blues will be long gone. It might feel a little out of the ordinary on a commercial job and that’s the beauty. It’s something different and that’s one thing clients are always looking for.

I’m not suggesting you shoot an entire job with this, let’s not go mad here. Take it out, put it in their hands to get the laughs rolling — burn a few frames of nonsense and then it’s back to business. This time with interested, included and happy clients.

And that isn’t to say this vintage camera is a gimmick, far from it. It’s a neat tool and could easily spark the creative flow and still allow for a little fun during an otherwise bland gig.

It even came in handy when at the last minute we realized we had no pictures to give to our friends and family in our Christmas cards this year. A few quick snaps utilizing the inbuilt timer and job done. No visiting the nearest drug store in a mad rush. No faffing about with an inkjet printer that’s so dry it will require a jackhammer to repair. 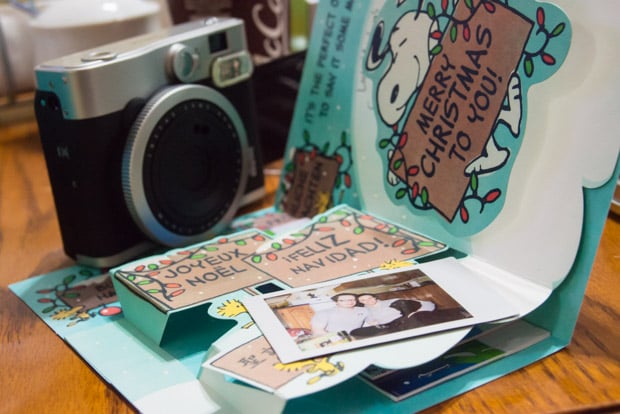 And now for the big question: should I buy it? Well, yesnoyesyerrrr… maybe. Personally, the answer is yes. I will use this for wedding receptions. The late night, 1:00 AM stuff when people are lose and having fun. Heck, it’s the kind of thing that I could put in a guest’s hands — a non-photographer even, one of the bridesmaids — and let them burn through a box while I’m off doing something else.

It’s just that simple to enjoy.