What do you get when you mix time-lapse photography, lip syncing to a Queen song and an insane amount of dedication? We imagine you get something like Day 1 by Matt Perren: a one photo per day time-lapse video that took him THREE YEARS to make.

The overall idea is fairly simple, just take a picture of yourself every day, moving your mouth just a little bit each time so that the sped up version at the end makes it look like you’re lip syncing to the music. In one sense, it looks like you’re simply singing along to a song, but all the while the rest of the world speeds by you. 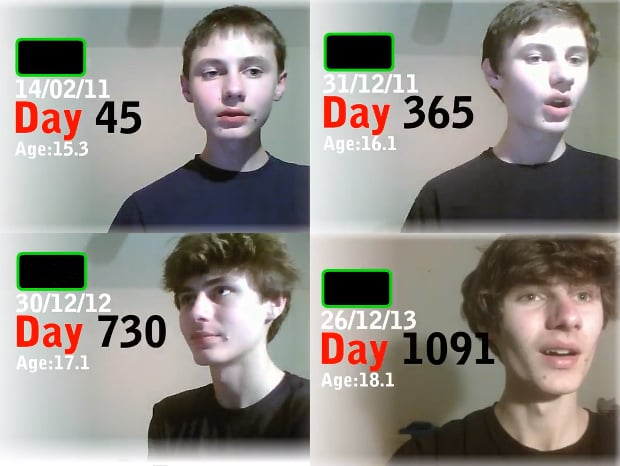 The final product is a bit uncanny: Perren’s hair keeps growing and then getting cut, puberty hits and the person lip syncing goes through some serious growing up from age 15 to 18… and yet he’s singing along to a song in real time.

It’s pretty cool, and you have to admire the kid’s dedication. We don’t know about you, but we can’t think of many 15-year-olds who would do this day in and day out for three years without missing a significant chunk of time and ruining the entire thing.

P.S. If you like this and you want to see a more professional lyric lapse video (albeit ones that didn’t take quite so long to shoot) check out the Dream Music and All These Lights videos by lyric-lapse pioneer Sean Michael Williams.