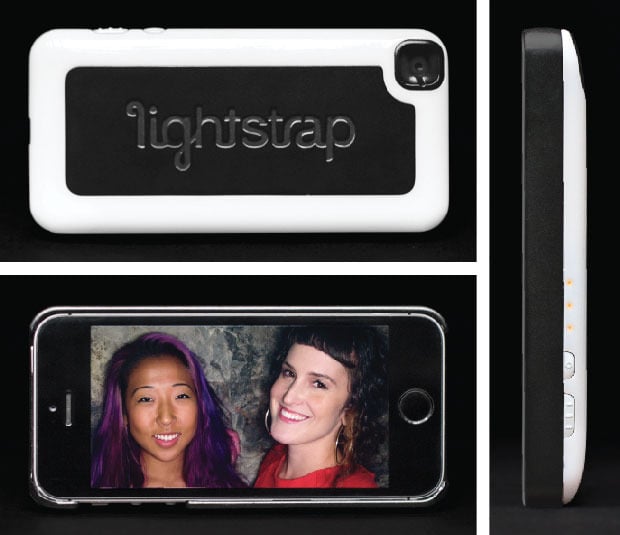 Although it can’t compare to a quality camera, it’s hard to deny that the iPhone is capable — after all, we’ve seen NY Times cover photos, fashion shoots and even a professional portrait taken using an iPhone as the camera of choice.

But if there’s one situation where the iPhone and its ilk perform badly, it’s in low light, when the phone’s own flash falls short of the kind of quality most people hope to capture, even with their phones. Enter the Lightstrap case: a product that, by all accounts, seems to solve this problem outright.

Lightstrap is basically a ring flash that doubles as a case for your iPhone 5 or 5s. Just attach it to your iPhone, pull up any camera app that is enabled to use the phone’s own flash, and snap away. The Lightstrap case works by sensing and mimicking the phone’s flash, so when the phone flash goes off, so does the Lighstrap case… only Lightstrap does it with ten times the power.

It’s also worth noting that this isn’t just a way to add some power to your flash, though it will certainly do that and, as a result, reduce blur and noise in your final photos. No, Lightstrap goes beyond that by giving you some control over your light as well.

Using the two buttons on the case, you can pick from seven different brightness levels and six different color temperature settings until you’ve got the flash dialed in just right. And since the Lightstrap runs off of its own battery (promises 500+ flashes per charge) you won’t have to drain your phone to use it.

Here are some sample photos lit using the Lightstrap case next to similar shots taken using only the phone’s built-in flash: As you can probably already tell by the embedded Kickstarter video above, Lightstrap is taking a swing at crowdfunding to raise the money required for the first production run.

The campaign is only a few days old, so for now you can still grab your own Lightstrap for the $87 early bird price, but once that runs out, getting your own will run you $97. Shipments (assuming they get funded) are expected to go out to backers in April.

To learn more about the Lightstrap or pledge for one yourself, head over to the Kickstarter page. And if you’d like more hands-on info, check out Gizmodo coverage (they got a production model ahead of time) by clicking here.

BASE Jumper Slams into Cliff After Pulling Chute, Captures the Whole Fall on Camera

The Breathtaking Beauty of the Western US Captured in Time-Lapse