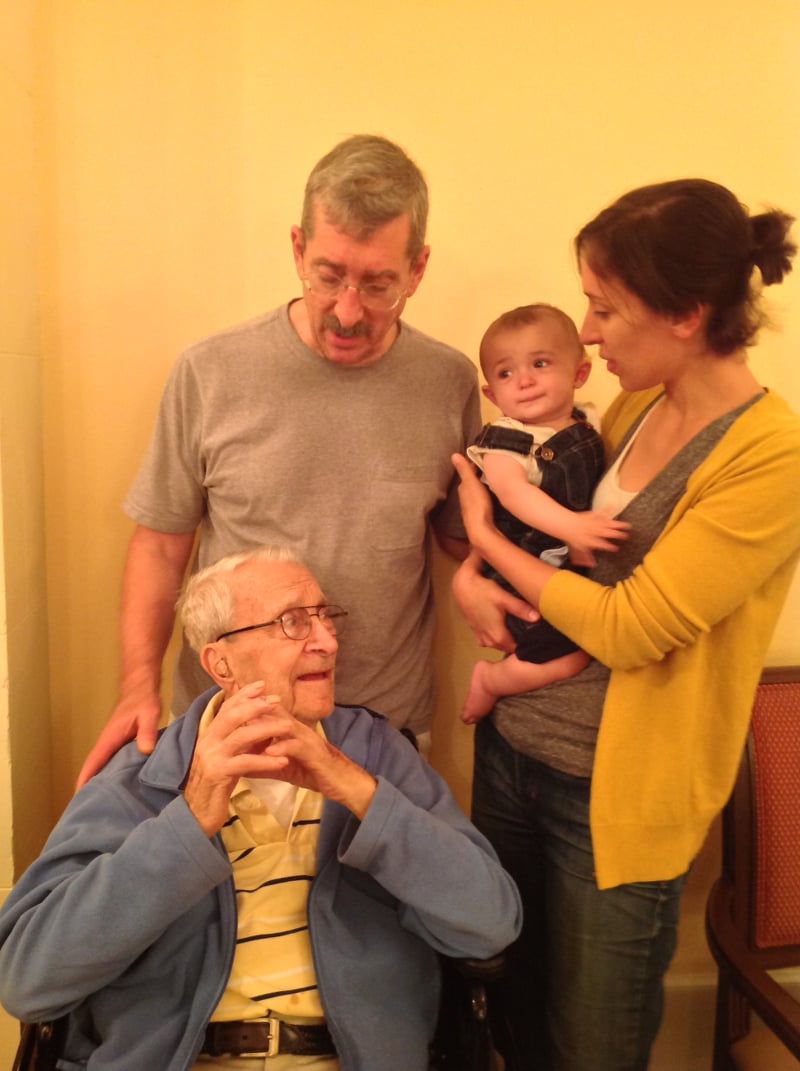 So I’m not saying that we flew down to Florida to take a picture, but I’m admitting we wanted one. A photograph of four generations, all alive at the same time. Proof that it had happened. Me, my son, my father, and his father.

My grandfather got sick nine months ago. Up until then he had been more or less fine, just old. He puttered along, talking to people and pondering things. Trimming his nosehairs and fixing his glasses with tape when they broke. He had continued at his hobbies. Yes, he told a lot of the same stories over and over again. Yes, he sometimes rambled on about things that didn’t always make sense, but my father does that too. I do that.

ANOTHER thing that happened nine months ago was that I was about to have a baby for the first time. And a day or two before I went into labor, my father called and asked if I was OK with his flying down to Florida to see his father. He felt bad, he said, because he wanted to be there to see the baby, but he would feel worse, he said, if something happened to his father and he wasn’t there. And I told him, obviously, to go see his father. That the baby would be here when he got back.

And so he flew to Florida. I gave birth to the baby. His own father recovered. He flew back home and probably either held his grandson or said something like, “Hey, nice work, great baby” or maybe high-fived me — honestly I have no idea what happened for the two weeks after having the baby because I was still bleeding out of my ears wondering whether I had given birth to a baby or been hit in the face by a grenade. But the point — the point, is that things do not always go exactly as you had planned them. You assume that you will have this baby and all your nearby family will come to this hospital to greet you and smile and share in your excitement, but sometimes it doesn’t work out that way.

On the final full day of our three-day trip we are ready to take a picture with my grandfather. And in my head, I think, this picture is going to be great. It has to be great because we paid for two $450 round-trip tickets to Tampa so that we could take it. It has to be great because it is possible this will be the last time I see my grandfather. It is going to be moving and poignant. It is going to be well-lit and all of us are going to look spontaneous yet perfectly composed. We can take it at sunset, while the orange light filters through the trees, the end of the day symbolizing the beauty of the inevitable passage of time. Our faces will be perfectly imperfect, the camera capturing the sincerity of our innermost thoughts. The baby and my grandfather will stare into each other’s eyes with an ethereal sort of understanding. It is a photo that will remain in my family for generations — that my son will keep framed on his desk as he grows older. The type of photo that Annie Leibovitz would pull from a stack of other, more ordinary photographs, asking, “Who? Who took this?”

And so, big surprise, that is not how things went.

We took the photo inside the nursing home because my grandfather was tired and did not really feel like going outside for a photograph. The baby was dirty because I had let him crawl around outside while playing with his second-cousins and because he is a baby and babies are always dirty. If you have one, you know this. The act of wiping dried snot and mashed vegetables off a baby’s face immediately activates neurons in his brain which instruct his body to produce more snot/mash more vegetables into his face. It is as inevitable as the law of gravity. The amount of time that a baby’s face is actually clean is so small it has yet to be caught by the fastest shutter speed on the most high-end camera. It is easier to get a photo of a giant squid.

I had forgotten, also, that I, only two weeks before, had given myself the world’s most terrible haircut and that my father smiles for photos as if he is begrudgingly holding in a bowel movement. And that my grandfather was not as young as he once was. Unable to hold the baby on his lap, I held the baby while standing off to the side. My grandfather sat in his wheelchair and stared straight ahead, unsmiling. The baby continually moved and looked at people who were not in the same direction as the camera. My father blinked a lot. I coughed. My aunt took pictures with her good camera and with her iPad but apologized later that all the photos on her good camera had accidentally been erased. I told her not to worry without mentioning that I myself have done that bazillions of times.

And so that evening I look through the photos and almost all of them are blurry. In the few that are not blurry I am usually blinking or coughing. In the ones where I look OK, my father looks like he is stoically passing a kidney stone. In the ones where my father and I look fine, my grandfather looks clinically-depressed. There are no photos that Annie Leibovitz would pick up, enthusiastically breathless. There is nothing I would even use as the cover photo for a Snapfish album. They are all average. The one photo in which we are not blurry and no one looks completely terrible was taken before we officially started taking photos because none of us was looking at the camera yet. My father and I are looking down at my grandfather, he is looking up at me, saying something, and the baby is looking off in another direction — most likely at a lamp or another nursing home resident or a ceiling fan.

And yet for some reason, the more I look at the photo, the more it grows on me. It is not a perfect photo, but I am suddenly realizing that that is fine. We get so overwhelmed with everything in life being perfect that we forget that nothing is supposed to be perfect. Photos do not have to be perfect. In my sister’s “four-generation photo” taken with her own son and my grandfather, my grandfather is cheerfully sporting two black eyes that he obtained while falling down the previous day. The point of most photos is to say, “I was alive and you were alive, and for a period of time our lives overlapped. This is what we looked like.”

So this will be the photo that we have and the one that I will show my son when he asks if he ever got to meet his great-grandfather. Maybe my son will keep it in a frame on his desk, but probably not — he will probably have better or more current photos to display. Maybe he will not even have a desk when he gets older. I have no idea. Maybe traditional pictures and photo frames will have become obsolete. Or maybe he will live so far into the future that we will finally have time machines, in which case he will be able to get in and travel back to November of 2013. He will watch himself crawling across the plank floors in his dark-blue overalls, pulling himself upright on his great-grandfather’s wheelchair, laughing hysterically as he’s tickled by the wrinkled finger of a 94-year-old man.

He will stand by the door of the time machine, watching us trying to capture it on film, laughing to himself at our bumbling, awkward attempts. And then, for the rest of his life, he will remember having seen it. When he someday dies, the memory will die with him. It is sad to think about, but it is also sort of OK.

Nothing lasts forever. It is nice that it existed at all.

About the author: Raquel is a writer and stand-up comic who lives in Jersey City with her husband and son. writing has been published in Reader’s Digest and BUST magazine. She keeps a parenting blog called The Ugly Volvo. This article was originally published here.