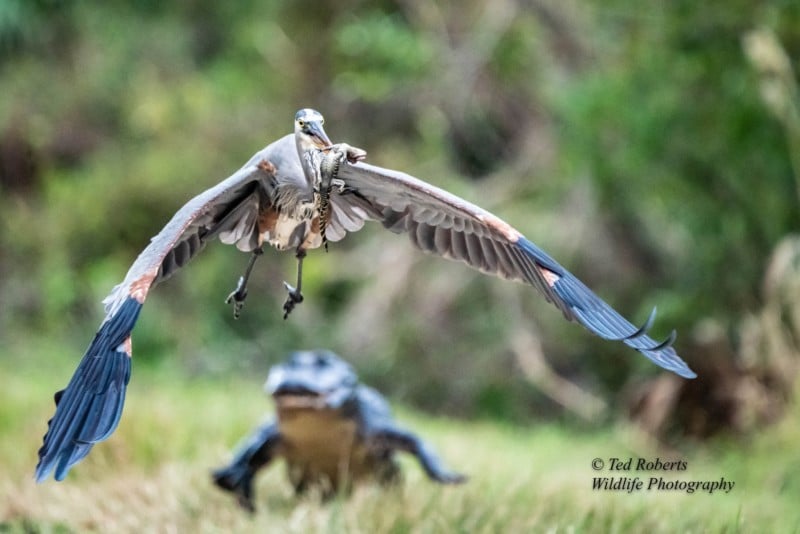 A photographer captured a dramatic scene of a heron flying off with a baby alligator while its helpless mother looks on.

Ted Roberts captured the life-and-death scene at Orlando Wetlands Park in Florida where he helps out.

“I was volunteering as a tour guide and while waiting outside between tours, we heard a commotion and saw a Great Blue Heron jump out onto the road with a baby alligator in its mouth,” he tells PetaPixel. 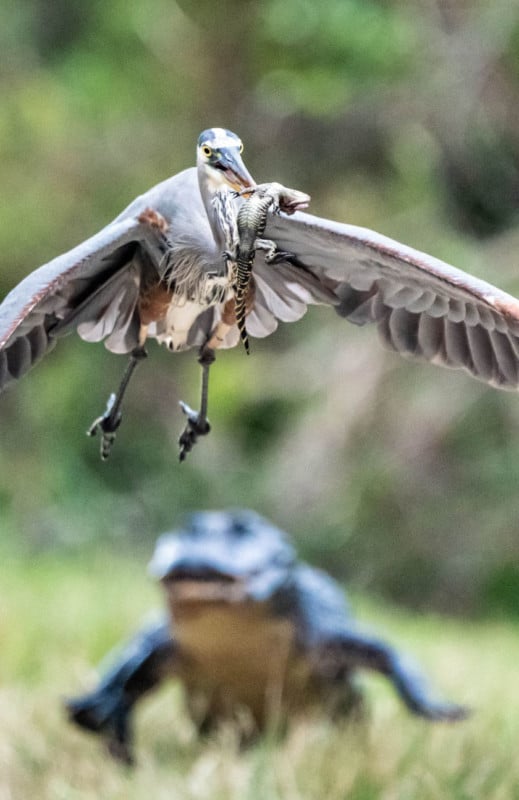 After giving chase the disheartened mother alligator thrashed back into the foliage, prompting unusual sympathy for the large reptile.

“Cool picture but anyone else kinda feeling bad for that momma?” Writes Kylene Spade.

However, others praised Roberts for his razor-sharp photography skills.

“Holy crap once in a lifetime photo opportunity and you nailed it! Amazing!” Writes Andrina Vanness.

As noted by Fox News, the Florida Fish and Wildlife Commission says that baby alligators can be eaten by a variety of predators including wading birds, raccoons, otters, and fish.

Or as one commenter puts it: “Who’s the apex predator now?”

It’s unusual to have a story about an alligator on the defense rather than attack. Earlier this year, photographer Bobby Wummer captured the moment a gator took a nibble on his GoPro camera, which was fortunately on the end of a 12-foot extension pole.

While Wummer’s GoPro escaped unscathed, a TikTok travel influencer flew her drone close to an alligator and watched as the reptile snatched it out of the air and destroyed it in a dramatic cloud of white smoke.

However, the scary pre-historic monsters are not always bad, a wildlife photographer in India spotted a crocodile father giving a ride to over 100 babies on its back as it swam across a river.