Back in June, graffiti artist Sofles was featured in a hyperlapse that showed him making his way around an abandoned building and creating various impressive tags at super speed. That video was received very well, so naturally, if one graffiti artist is good, four would be four times better right?

Well that last statement is up for debate, but if you judge it based on views alone, it’s actually a lot more than four times better. The video above brings together Sofles with friends and fellow world-class graffiti artists (is there such a thing?) Fintan Magee, Treas, and Quench in a hyperlapse that shows all four turning an abandoned warehouse into a massive piece of art.

It takes the artists roughly five minutes of time-lapse awesomeness to do some serious tagging, with a few silly antics thrown in just for fun. 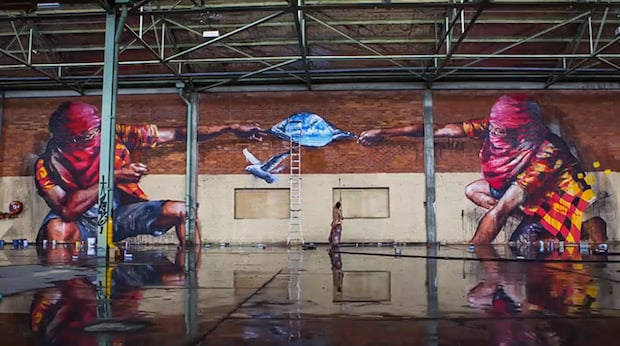 The video was shot by photographer Selina Miles (yes, the same one that did the first Sofles hyperlapse) and since launching last Friday has accumulated over 3.25 million views. By comparison, the original hyperlapse is still hovering just over 500K.

Like the first video, this too was created in partnership with Australian aerosol paint brand Ironlak, but we’re not sure the artists, company or photographer had any idea how popular round two would get.

To see more of Miles work, or follow the graffiti artists featured in the video, just click on any of their names in the paragraphs above and you’ll be directed to their websites, Facebook pages or Instagram accounts.

Chicago Sun-Times Concessions are Not a Victory for Photographers