On the off-chance you thought photo blogs had some kind of monopoly on rants about lazy and thoughtless photography practices, witness the majesty of Denver TV news anchor Kyle Clark in action.

Denver was hit by a major snowstorm last weekend. And, like clockwork, readers start showering Clark’s employer, NBC affiliate KUSA, with photos of snow… Sitting on top of their patio furniture… Doing nothing.

“Why is it that every time it snows, we whip out photos of our patio sets like we’re showing off baby photos of our kids?” Clark asked in an on-air editorial/rant that quickly went viral. “Is that really the best we can do?”

“We live in one of the most beautiful spots on earth, but we point our cameras toward the back porch,” continues Clark. “Yes, everybody is impressed you have a four-piece set; we saw it at Costco, too.” 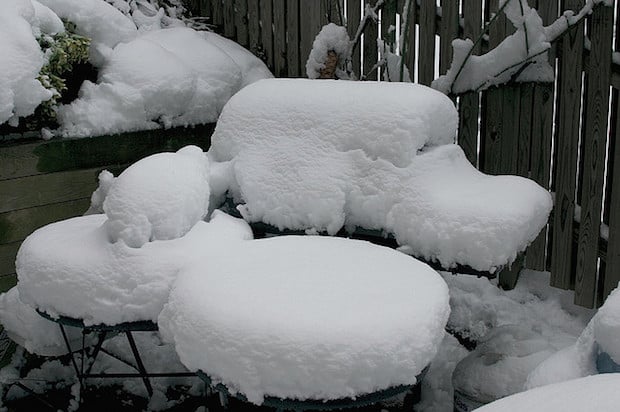 Clark went on to suggest that viewers expend a little more effort next time the powder flies. Try getting a person in the shot. Maybe that person could even be doing something, like winter sports or shoveling the driveway. Anything but static, mass-produced objects covered in varying levels of snowfall.

“I know why we take photos of snow-covered patio sets: It’s easy,” Clark concludes. “Point your camera out the window and click. Are we really the state that takes the easy way out? C’mon Colorado. We love winter. We own winter. So let’s see some photos that look like it next time it snows!”

Response to the piece was generally delighted (with a few exceptions), with photo dweebs especially appreciating the call for aesthetic sanity. Clark played along with the comic tone, Tweeting after last night’s soul-crushing Denver Broncos loss: “just want to go home and look at my secret stash of snow-covered patio pics.”