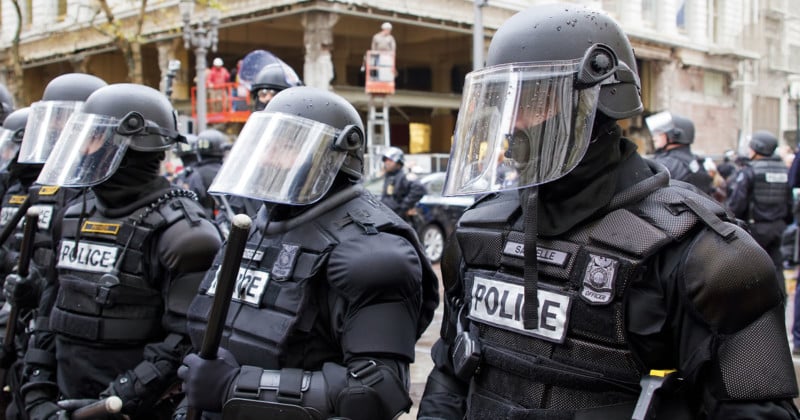 A photographer is in line for a $350,000 payout from Denver Police after he nearly lost his finger while covering the George Floyd protests in 2020.

Trevor Hughes sued the City of Denver in a federal court after a projectile struck his ring finger as he took photos of the unrest.

“I looked down at my hand and saw my finger and immediately just thought, ‘Oh my God. They’re going to have to amputate this thing,” he told KDVR Problem Solvers. “Blood spurting out like you see in the movies.”

Hughes, an avid photographer, and guitar player suffered a broken finger in the melee. “There was a mark on my finger – a good sized mark – it was like a perfect circle that left a mark there,” he said.

According to Newsbreak, Hughes believes a police projectile did the damage, cleanly breaking his bone and sending him into shock.

“There was a mark on my finger – a good sized mark – it was like a perfect circle that left a mark there,” he said.

Hughes said he filed the lawsuit because he wants accountability. “To have a just society, I think there has to be justice,” he adds.

Andy McNulty, the attorney who filed the suit, said not enough police officers have been disciplined or held accountable for their actions during the protests.

McNulty is also representing other people who suffered injuries during the protests and riots in separate lawsuits against Denver. “We’re looking to hold someone accountable,” said McNulty.

The city of Denver has paid out millions in settlements related to the downtown protests and other public safety missteps. The council paid out $128,000 in August, $140,000 in July, and $325,000 in June in police department settlements.

There has been a number of instances where photographers were injured or mistreated during those tumultuous months in 2020. Photojournalist Linda Tirado was blinded by a foam bullet fired by police while covering the George Floyd protests in Minneapolis.

Footage emerged of a Denver police officer shoving a photographer into a fire as the protests raged.