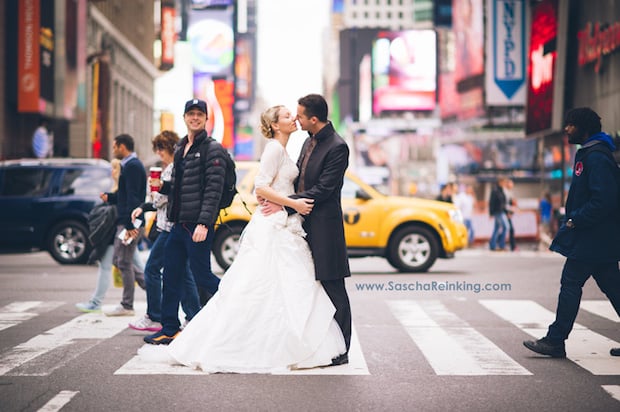 It’s not necessarily the way you expect to go viral when you’re a photographer, but one of NYC wedding and lifestyle photographer Sascha Reinking’s photos is racing across the Internet at warp speed today after actor Zach Braff (of Scrubs fame) photobombed his newlywed shoot in the middle of NYC.

For all Reinking knew, his recent shoot of German couple Verena and Michael was just like any other photo shoot. They were beautiful, the photos were turning out great, all boxes checked. Little did he know that, while photographing them on 42nd Street with Times Square in the background, he scored a famous cameo!

@zachbraff Sir, I think you photobombed my newlywed couple the other day in New York. :) Well played… pic.twitter.com/QFpgGM8pVi

Actor and Director Zach Braff — best known for his role as Dr. John Dorian in the television show Scrubs — happen to be crossing the street while Reinking was shooting and dropped an epic photobomb right behind the couple. The kicker: Reinking didn’t even realize it until he got home and started editing the images!

Of course, as soon as he saw it, he put the photo up on several Photographer Facebook Groups to confirm Braff’s identity, after which he tweeted the image to Braff himself with the message “Sir, I think you photobombed my newlywed couple the other day in New York. :) Well played…” (tweet embedded above)

That’s when things got crazy, because Zach Braff went ahead and retweeted the image to his 1.3 million followers:

This is one of my best photobombs ever: pic.twitter.com/LZS0TZE3JS

The rest, as they say, is viral history. We are not the first and won’t be the last to share this photo. In fact, given the massive influx of requests he is getting from major news outlets and magazines (among them People and E!Online) we were surprised he even had the time to reply to us and grant us permission to share the shot.

So there you have it, how do you get a photo to go viral? Easy enough, just get a famous actor to photobomb you in the middle of NYC… no biggie right? For the full story from the man himself, be sure to head over to Reinking’s blog here. And if you’d like to browse his professional work, you can find his entire portfolio on his website.

Image credits: Photograph by Sascha Reinking and used with permission.