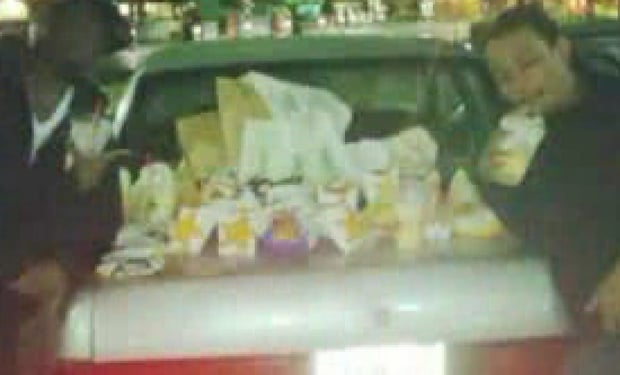 Sure, Instagram has provided some folks with a ready-made market for selling illegal items or doing unsavory things, but the photo sharing services has also expanded the boundaries of how incompetent a crook can be.

Take the case of four auto burglary suspects in the Sacramento, CA area who were nabbed a few hours after the alleged crime, partly because they uploaded photos to Instagram of a Carl’s Jr. pig-out purchased with a credit car taken from one of the burglarized cars.

The break-in happened Saturday evening and was quickly discovered by the owner of one of the vehicles, who promptly reported her stolen credit cards. That’s when she learned that one of the missing cards had just been used to buy a $120 worth of heartburn at a nearby Carl’s Jr.

Restaurant employees, struck by the humongous order and the odd behavior of the patrons, recorded the license plate of the car and even Instagrammed a copy of the receipt. From there, it just took a little sleuthing to match up that information with a recent Instagram post showing a couple of dudes with the back of their car piled high with fast food.

By Sunday evening, the four suspects were in jail. “I think they’re kind of stupid,” restaurant worker Katelyn Hubick summed up for The Sacramento Bee. “I think social networking is helping to catch people.”

No word on how they’re doing with digesting a combined haul of 12 sandwiches, three quesadillas, five tacos, six orders of fries and five shakes.

(via The Sacramento Bee)