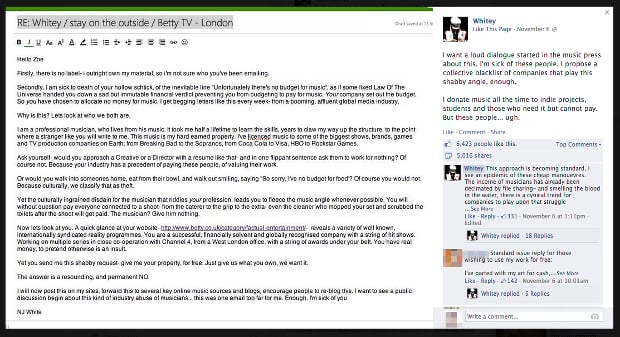 A strongly worded letter has gotten a surprising amount of attention in photograpy circles recently.

It was written by UK musician Whitey (aka. NJ White) in response to a TV producer who requested to use his work for free, and it’s gotten popular because, even though it was written by a musician, photographers really seem to love Whitey’s no BS response to a request many of them are familiar with.

Now, to be clear, we’re neither condoning nor suggesting you approach responding to requests for free use of your work this way. Commercial use of your work is definitely something we believe you should be paid for; however, a polite no will probably work just as well without burning any bridges.

On the other hand, there is something satisfying about an artist, whatever their branch of art, letting fly with all of the pent-up anger that tens or hundreds of these requests lead to and, in the process, demolishing some oft-used excuses that companies give.

Here’s the full letter for those interested in reading the whole thing: 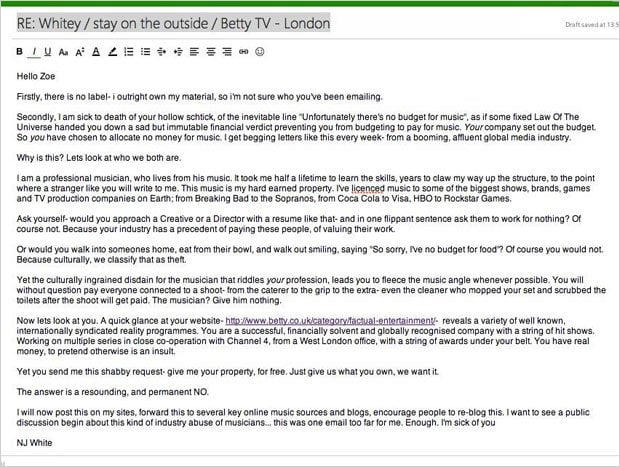 In the following section, the word “music” could just as easily be replaced by “photography”:

I am sick to death of your hollow schtick, of the inevitable line “unfortunately, there is no budget for music,” as if some fixed Law of the Universe handed you down a sad but immutable financial verdict preventing you from budgeting to pay for music. Your company set out the budget. So you have chosen to allocate no money for music.

He goes on to point out that “even the cleaner who mopped your set and scrubbed your toilets after the shoot will get paid,” so why wouldn’t you pay the musician (or in our case the photographer).

It’s a sad fact that art in all its forms is being devalued as more people are willing to work for free, which in turn encourages more producers, publishers, ad execs, etc. to ask for free work. And even though we don’t suggest people respond this way, it might not be such a bad thing that this letter is getting attention in photography circles.