Susan Dobson is best known for her work on suburban culture, architecture, and landscape. Her photographs have been exhibited across Canada, as well as in the United States, United Kingdom, Belgium, China, Germany, Spain, and Mexico. Her work was included in the Canadian Biennial titled Builders at the National Gallery of Canada in 2012, and she was a contributing artist to the Vancouver 2010 Cultural Olympiad. Dobson is Associate Professor at the University of Guelph. 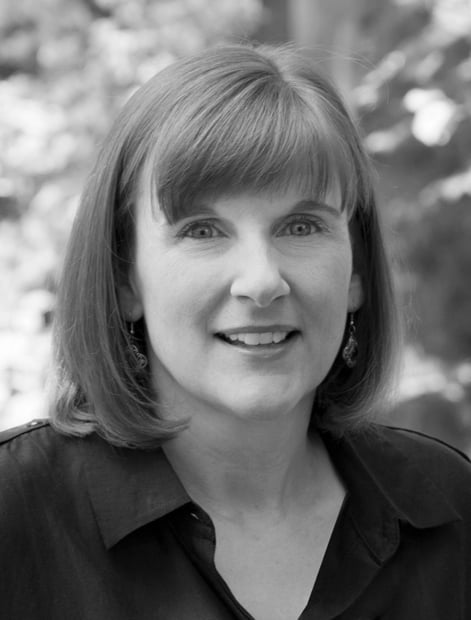 Susan Dobson’s series “Sense of an Ending” gives us look at architecture, decay and a literal sense of ending — reminding us that eventually everything around us will become rubble. Through the use of composite imagery, Dobson crafts scenes frozen in melancholy.

As the overcast skies in each piece forebode cold and rain, and as the architectural styles have begun to weather and collapse, these images, while fiction, portray the inevitable truth of not just homes and buildings, but perhaps cities and civilizations as well.

PetaPixel: Let’s begin with some background on how your interest in photography first came about. Who were among your earliest influences?

Susan Dobson: I started taking pictures with my mother’s old Brownie camera when I was about 9 or 10 years old. The first photograph I ever took was of a poinsettia plant on a windowsill. Because it was backlit by the window, the plant appeared as a silhouette in the print. I thought it was magical, how an object could be transformed by the camera.

I ran errands for neighbors and looked after their children in order to save money for film. I bought my first camera with my savings at age 13. As I had very little exposure to the art world, I was primarily inspired by photographs I saw in National Geographic magazine. When I was a teenager, I wrote to nature photographer Freeman Patterson to ask him for advice on pursuing a career in photography. He replied with a long letter that outlined some of the challenges of pursuing a life in the arts, and he gave me a great deal of practical advice on how to go about it. 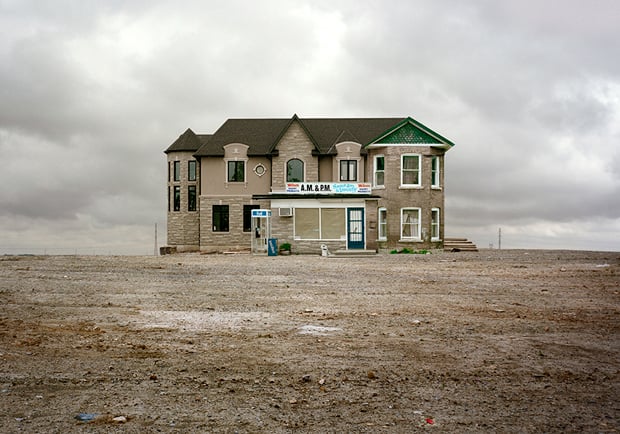 PP: Can you give us some details on your artistic process, and how the pieces you make develop from ideas into reality?

SD: I recently read the book The World Without Us by Alan Weisman, in which he predicts how the world would respond if humans were to suddenly disappear. The book conjured up very visual imagery for me — especially when Weisman described what might happen to architecture and infrastructure.

At the same time I was interested in the way that photography no longer necessarily references the past — the “that has been” of the past tense — but through digital imaging can now refer to the future perfect — “that will have been.” It occurred to me that I could use photography as a form of foreshadowing. I tried to accomplish this by constructing images slowly over time in Photoshop, using my own image archive as source material. 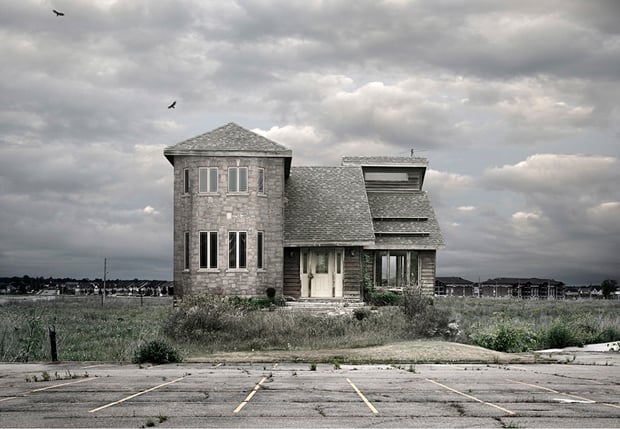 PP: When searching for subject matter, what is it that usually first catches your eye? Do you go looking for particular image elements, or wait for something to speak to you in some other way?

SD: For this series, I have built up an extensive archive of imagery that I draw upon. Sometimes I have a list of subjects that I think I will need, and I work from that. Most of the time I drive randomly, looking for areas that are either newly built or in decline. Transitional areas that are about to be developed or demolished and industrial areas are interesting to me. 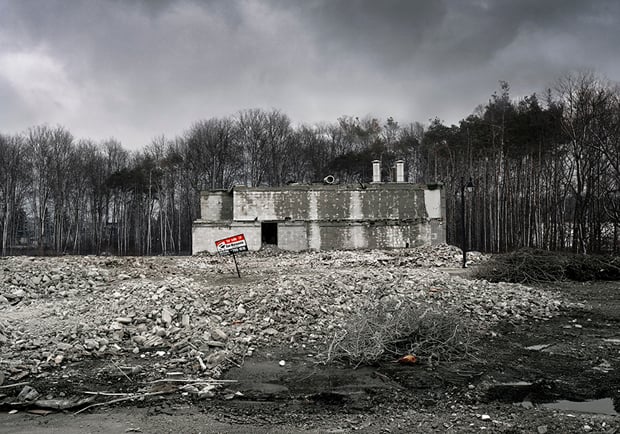 PP: The scenes in your series Sense of an Ending show us modern architecture in ruins. These could be seen as a dire prediction about the current global economy, or even the future of humanity. Talk about your ideas going into this project.

SD: This work is related to a 2008 series of mine called Retail. The series Retail imagines what might happen to large box stores and parking lots after economic collapse and the decline of oil supplies. Sense of an Ending further explores the continued anxiety of an era, but this time focuses on housing. 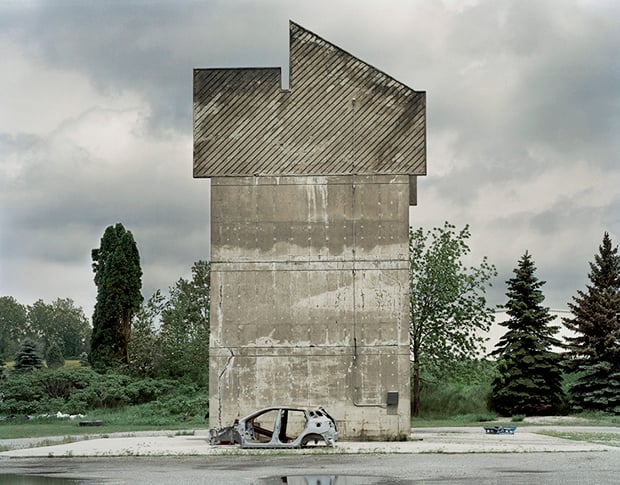 PP: Other audiences might find the decay of mansions, landmarks and convenience stores merely chronologically unsettling — difficult to place in any timeline, and difficult to think about the decay and finality. Do you find that viewer response to your work consists primarily of this sort of existential discomfort? Have there been any reactions which surprised you?

SD: This work is brand new, so I have not yet had an opportunity to share it with many people. I am interested in how photographs have the ability to sit outside of any definitive time period, and to feel dislocated in time. It allows for associations to be made with a range of historical periods.

For me, the series evokes images I have in my mind of the ruins from WWII that were still evident in Germany when I lived there as a child. 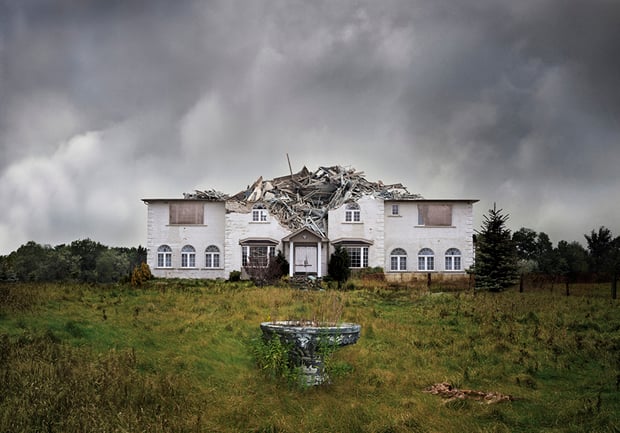 PP: I’m intrigued by the ever-present autumnal gloom that overshadows each image in this series. Talk about contemporary artists or ideas that have helped to inform your aesthetic decisions.

SD: It was important to me to work with a colour palette that could not easily be identified with any particular time period or photographic trope. I subdued the colour palette in order to suggest a post-industrial gloom, and also to avoid references to vibrant digital consumer photography, or traditional documentary black and white photography.

I am also very influenced by painters. I especially enjoyed the colour palette used by Julie Mehretu in her exhibition Liminal Squared at the Marian Goodman Gallery, and I love everything by Wanda Koop. 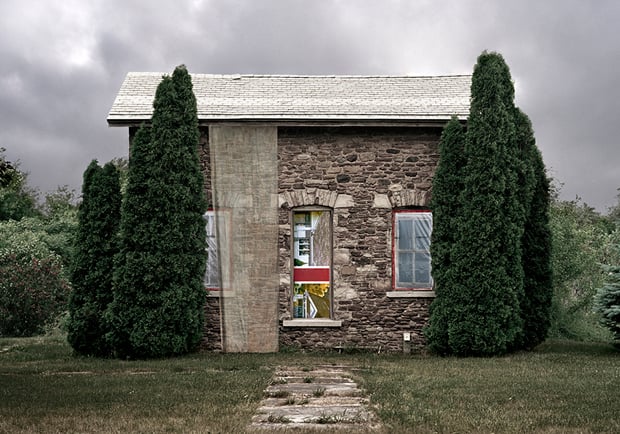 PP: It is also notable that in many of these images, the “center” or “core” of the structure (for example the front windows, the foyer, the chimney) is either the most rotted away area, or the only thing left standing. In both cases the affected structure seems to take on a particularly corpse-like hollowness. I wonder if this was an intentional thematic choice, and what it might represent to you?

SD: It wasn’t intentional, although reflecting on it now, I may have been thinking about the ruins that I witnessed in Germany, where the structures often seemed to have collapsed from within, leaving only the outer shell. I have always seen architecture as anthropomorphic, so perhaps the hollow inner shell could be interpreted metaphorically. 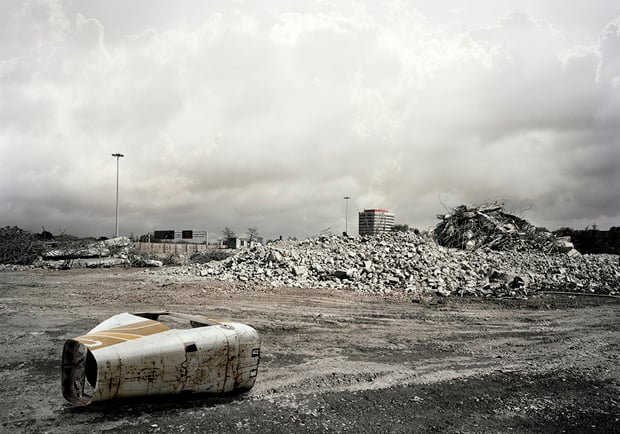 PP: What about the architectural styles do you tend to depict? How do they resonate with you?

SD: I tried to use a range of architectural styles for this series — Victorian homes, new subdivisions, stone cottages, monster homes, etc. I wanted to limit the architecture to buildings that could have been lived in, as opposed to commercial or industrial buildings, yet blur the lines between suburban, urban and industrial landscapes, creating a sense of geographic dislocation. 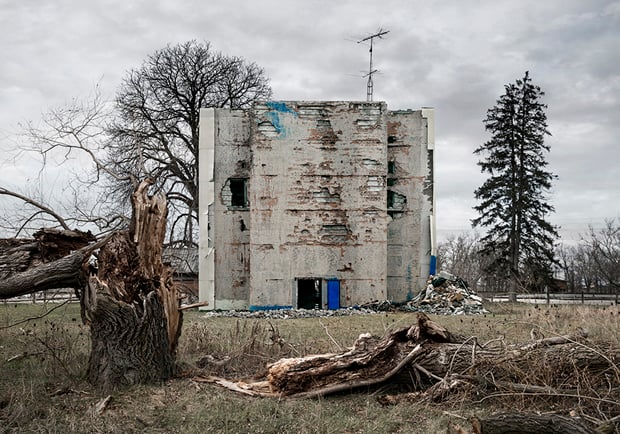 PP: How do you hope your work will affect your viewership? Are there any lessons you’d like to convey, or inspiration you want to pass on?

SD: I try not to have any expectations about how my photographs might operate once they are out in the world. I make work about things that interest me, and I enjoy hearing new interpretations about the work and engaging in dialogue. This allows me to see things in new and unexpected ways, and often initiates new ideas and directions. 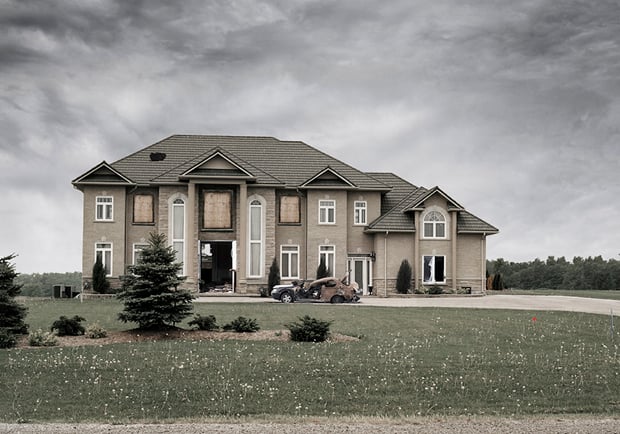 PP: Lastly, what will you be doing over the next several months? Any exhibitions or new projects in the works?

SD: I have just wrapped up exhibitions at Gallery 44 in Toronto, as well as Art Fair Toronto and Art Fair Cologne. This series is being exhibited for the first time at Fotonoviembre in Spain during the month of November, and will be shown in North America in a group exhibition at George Eastman House in Rochester, titled Time and Buildings, opening March 1, 2014. The exhibition will then tour galleries in the US and Canada 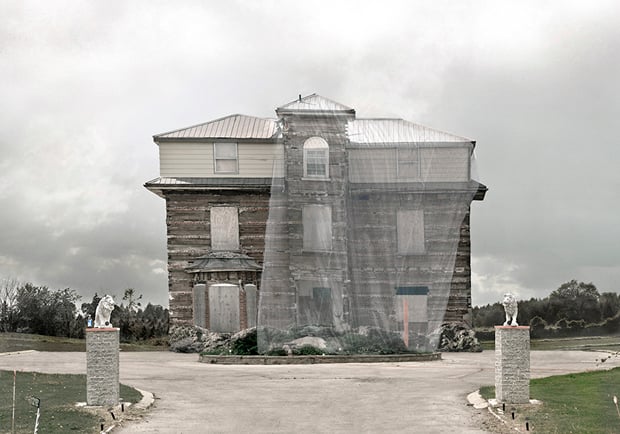