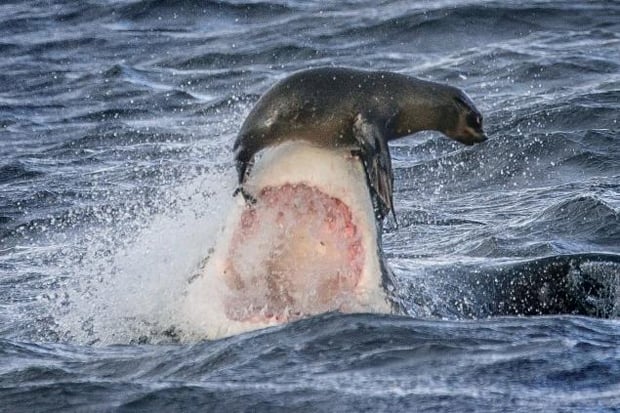 “You should’ve seen it! I was that close to the dude’s teeth!” No doubt there was some pretty excited talk going around a South African seal colony recently, after a young pup narrowly escaped a shark attack by balancing on the great white’s nose.

Jenkins was on a tour boat off Seal Island, a busy shark feeding ground near Cape Town, South Africa, last July. He wasn’t that surprised when he saw a great white burst from the water in pursuit of lunch — that’s what people take the tour to see.

The surprise came when the shark’s intended victim, a young seal pup, managed to say just on top of the shark’s mouth by balancing on its snout, then jumping off to swim away to safety and, later, Internet fame. “This seal was one lucky pup,” Jenkins told Caters News Agency.

While in this case the seal pulled off the greater trick, Jenkins said a shark springing for its prey at speeds up to 25 mph is an awesome sight. “The breaching sharks are amazing,” he told Caters. “The speed and agility just takes your breath away as they can explode from below without warning.”

Expect the Unexpected: Jimmy Fallon Gets Peed on by Baby During Photo Shoot