Sure, the 1980s isn’t quite so far in the past as, say, the first photo, but the commercial above is classic nonetheless. It shows off the Nimslo 35mm 3D camera, the first consumer level 3D lenticular camera of the 80s and, if you believe the commercial, “the most important new camera of your lifetime.”

Okay, so some people who were around then and are still around now might disagree with that statement, but you have to give it to the ad guys… they weren’t bashful about this one. 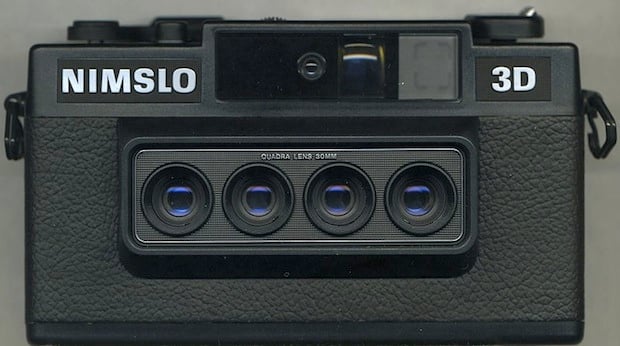 Admittedly, it was something pretty special at the time. It used normal 35mm film to take 3D shots, something nobody else was doing just yet, and was much smaller than its 3D competition. Each time you snapped a photo, it would use two 35mm frames, capturing one portrait-orientation picture per half frame — four pictures total.

Those frames could then be developed and turned into 3D photos thanks to lenticular printing. Photos that make your family look so real that (in another lofty statement) the commercial claims you feel you could “reach into the picture and hug them.” None of the grand statements before it can beat the tagline of this particular commercial though. If the fact that it was the most important camera of your lifetime wasn’t enough to get you running to your local camera shop to pick one up, they end the ad by asking, “When was the last time you performed *short dramatic pause* a miracle!?”