Creating video from photos isn’t a new idea. Be it stop-motion or some form of time-lapse, we see it all the time. The creation above by filmmaker Paul Trillo is a little bit different though. In 41 photos he takes you down 41 New York City blocks, mesmerizing you right into the sunrise.

The video was created in partnership with Nokia as a way to yet again show off the Lumia 1020 and all its 41-megapixel prowess. No worries, the video doesn’t try to sell you on the camera, it’s more interested in bending time and space and trying to give viewers vertigo.

Basically, Trillo took 41 photos of 41 NYC blocks, evenly spaced between the hours of 3am and 7am. Then, when he put them together, he simply zoomed from one to the next, creating something of a vortex video that sucks you through the city. 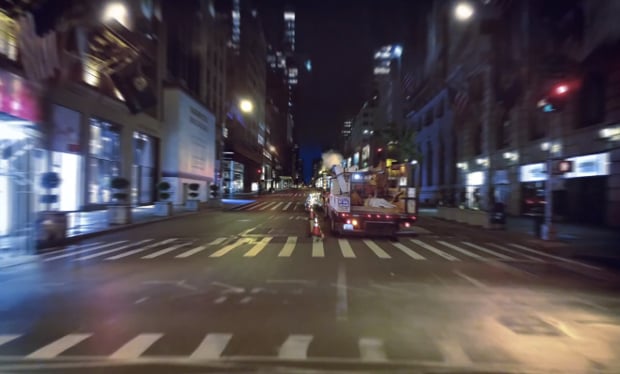 Trillo is taking you through 41 city blocks and four hours of time, but he’s doing it all in 50 seconds using only 41 photographs. It’s like you’re traveling at 145mph (about 2 miles in 50 seconds) but it’s taking you 4 hours to make the trip. It really messes with your sense of perception.

The video was inspired by the opening credits of the movie Limitless, and the hope was that it would give the illusion that you could zoom the Lumia 1020’s photos into infinity. Obviously that’s not the case, but the effect is only possible because Trillo had 41 megapixels of resolution to play with in each photo.

Check out the video at the top for yourself, and if you want to get more behind-the-scenes details or hear Trillo’s thoughts on the 1020, head over to the Nokia Conversations blog by clicking here.

Project One: One Hour, One Camera, One Setting, One Dollar Per Person