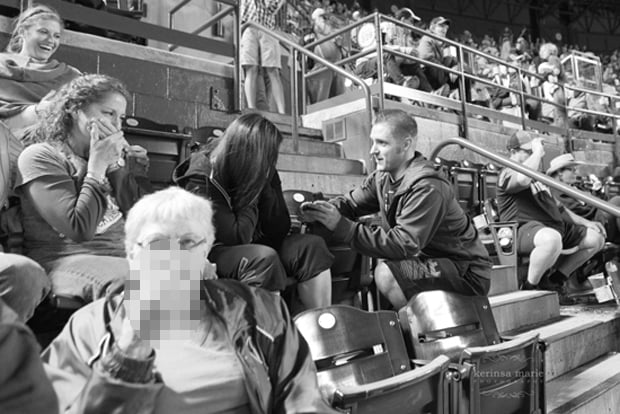 I suppose we all owe a small cultural debt to this anonymous older lady at a recent Colorado Rockies game. Thanks to her, we now know what the exact opposite of a photobomb looks like.

That would be having a cranky grandma type show up in the money shot of your carefully arranged proposal, flipping the bird at the camera to show exactly how she felt about the interruption.

The story starts with Kenny Lovelace deciding to pop the question to Molly Ryan via Jumbotron at Denver’s Coors Field. He had a ring, made sure family and friends were there for the moment, and had photographer Kerinsa Mullins on hand (surreptitiously) to capture the joyous moment.

Mullins had to stand up to get a decent angle once the message appeared on the big screen, and an elderly couple whose view she was blocking let her know they didn’t appreciate it, even as the rest of the stadium was in full “Awww!” mode.

Mullins got her shots, got out of the way as quickly as she could, and prepared to review the shots with the bride-to-be the next day. It wasn’t until then that they saw the lady shooting the middle finger at the camera. 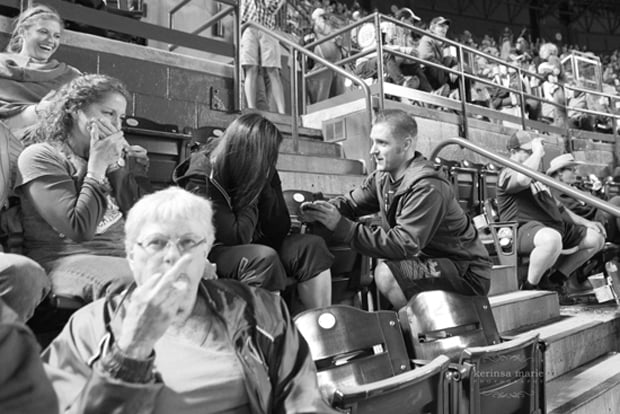 The photographer was horrified, but Ryan thought it was a hoot:

“I couldn’t stop laughing. I said it was the greatest photo I’ve ever seen,” Ryan told news station WTOP.”There is a girl sitting behind us that is so excited for us. My mom is crying, I’m crying, and Ken’s nervous and then there’s this lady flipping us off.”

Ryan says she’s thinking of using the image for a “save the date” refrigerator magnet, and she’s issued a blanket invitation for the aggrieved senior to attend the wedding. “I would love for her to appear in one of my pictures at the wedding,” says Ryan. “That would be terrific.”