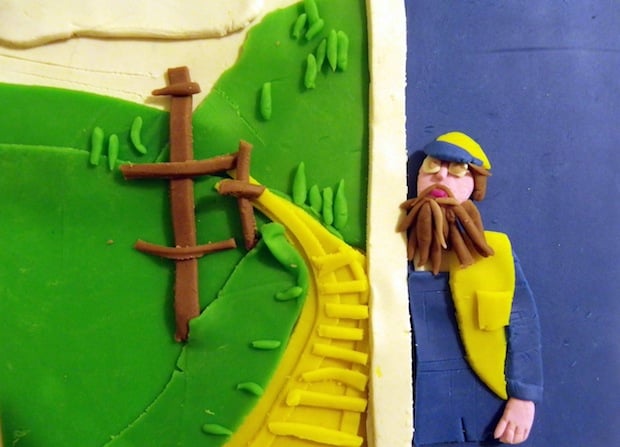 When Eleanor Macnair made her first Play-Doh re-creation of a famous photo, she had no idea how big her little project would hit it. But only a little over a month after launching a Tumblr to display her work, she’s gotten more publicity than she could have expected.

Macnair started the project as part of a pub quiz organized by MacDonaldStrand — the folks who brought you dot-to-dot drawings of iconic photographs. “One of the rounds was to make an iconic photograph out of Play-Doh,” she tells the BBC, “and so it began.”

From there, the idea evolved into the “Photographs Rendered in Play-Doh” Tumblr and the rest, as they say, is viral history.

Each photo takes about an hour to re-create (depending on how complex it is) and is made entirely out of Play-Doh from the six colors she has at her disposal. At the top we have a Play-Doh version of “Hobo going from Denver to Spokane by freight train,” shot in 1986 by John Vink. Check out more of her best-known re-creations below:

“It is honestly just a bit of fun and I wouldn’t want anyone to take it seriously,” says Macnair. “My hope is that maybe it will introduce a new audience to some of my favorite photographs or re-introduce those who are already familiar with the works, so they start to really look at the photographs again, the content and the context.”

You can find a ton more examples over on her website. So far, she has 29 re-creations up and is thinking she’ll get that number up to 100 and then call it quits. If you have a particular photo in mind that you’d like her to make, you can submit your request here.

Oh, and by the way, if there are any collectors out there who would like to snag one of these re-creations for home, you’re out of luck. “None of the copies exist anymore,” says Macnair. “They are all crumpled back up in their respective pots, waiting for the next time I have a spare hour.”

Image credits: Photographs by Eleanor Macnair and used with permission.

Blast From The Past: Classic Commercial for the Polaroid SX-70 Land Camera

Photographer Embarks on 40,000km Bike Trek Around the World with His Camera