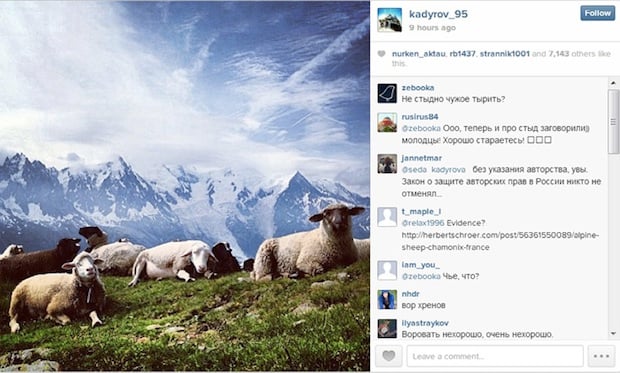 As copyright disputes go, this one sits squarely on the border between strange and stranger. We’ve seen plenty of people have their photography rights infringed upon, and it wasn’t even that long ago we saw it happen over Instagram, but we’ve never seen the president of an entirely republic make that mistake.

But that’s exactly what happened to Dutch mechanical engineer and photographer Herbert Schröer last week, when an email from a fan informed him that the president of Chechnya, Ramzan Akhmadovich Kadyrov, posted one of Schröer’s photos on his Instagram account without any permission or credits.

As soon as he found out, Schröer took to Instagram and Twitter to share the bizarre story along with a basic question: “Should I take this as a compliment or should I be really mad?” (Warning: Language):

Holy shit!!! The president of Chechnya has stolen my Instagram photo and put a filter over it. http://t.co/Y5F90sx8Nn @instagram

Now, we know what you’re supposed to do when someone infringes on your copyright, and general wisdom is that you should never take it as a compliment when someone steals your work, but how do you react when the guy doing the stealing is the president of Chechnya? Like we said… on the border between strange and stranger.

To his credit, President Kadyrov has since removed the photo from his Instagram account, and hopefully learned a lesson from Schröer who, fortunately for the president, didn’t seem to be in any rush to get litigious. Some photographers might not have been as kind, and then could you imagine the headlines?

The Bonzart Lit is a Fun and Affordable Tiny Toy Camera

The Square: Photos of Artist Seokmin Ko Blending Into the World Behind His Mirror