Want to experience what it feels like to be a photojournalist in the midst of the violent protests and clashes that have been occurring throughout the country of Egypt? Check out the video above.

It was created by photographer Amanda Mustard, a self-taught freelance photojournalist who’s currently based in Cairo, Egypt. When an anti-Islamic video went viral online in September 2012, Mustard went onto the streets with a GoPro mounted to her DSLR to document the resulting turmoil. 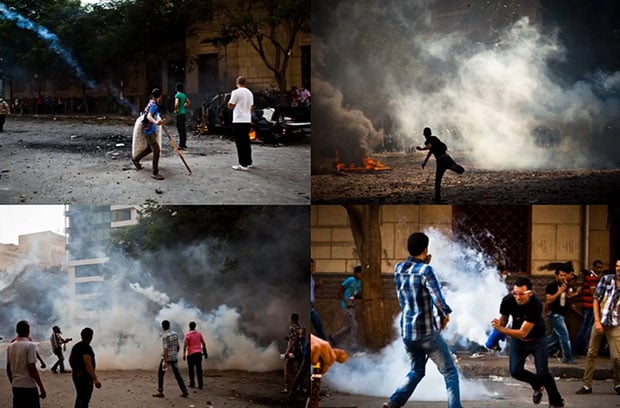 The footage has resulting photographs sprinkled throughout at the times they were captured.

These clips are from three of these days, closing with the morning of 15 September, when police clamped down on the uprising with force by destroying all stalls and tents in Tahrir Square and arresting scores of protestors.

After creating the video above, Mustard decided to try and do point-of-view videos more regularly. “I think it’s important to a firsthand look into the dramatic, or sometimes dramatized, moments where ‘sellable’ news images are created,” she writes. “Also, you can get a feel for highs and lows of what it was like to be there, to correct the all-too-often-exaggerated perception the media often gives.”

Here’s a second video from October 2012, showing supporters and opponents of then-President Morsi engaging in violent clashes on the streets:

You can find more of Mustard’s work on her website and on her Tumblr page.

P.S. Earlier this year, we shared a similar point-of-view video that was captured during protests in Brazil.

Biiwatch: A Wireless Smartphone Camera Remote for Your Wrist