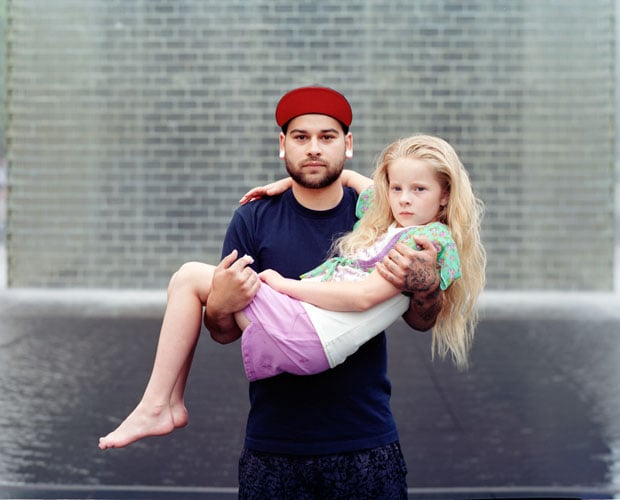 While photographer Richard Renadli was in the midst of his 2003 project, See America By Bus, where he was photographing groupings of strangers waiting in Greyhound bus stations, he began to think about exploring the idea of expanding on his group portraitures of strangers concept.  “To create spontaneous and fleeting relationships between complete strangers,” as he as stated.

So in 2007, he began approaching strangers, again all across the US, and convincing them to participate in his photobook project Touching Strangers.  Simply, and yet not so simply, asking complete strangers to connect with each other through touch, for the moment it takes to make a photograph.

Six years later, Richard readily admits that the initial ask still causes him a bit of nervousness and anxiety.  His process is to carefully survey whatever neighborhood or area he has chosen, for just the right casting combination that will elicit an interesting tension (or not) of connection. Once he finds the person, he approaches them and introduces himself.  Often, he’ll show them examples of work on his iPad, so that they can better understand who he is and what he is doing.  To gain a bit of initial trust.  He’ll then repeat the process until the grouping is complete.  Not everyone agrees.  But then again, sometimes he’s surprised by those that do.  Richard will have them sign an editorial release, more for their contact information, so that he can send them a print from their sitting.

For nearly 160 groupings, Richard has positioned two or more strangers in front of his beloved large format 8×10 camera (which he has left set-up, sometimes unattended, while he finds his subjects) and directed them to touch, perhaps in a way that most people who don’t know each other would otherwise resist.  He seems to have a way of quickly getting them to feel comfortable enough so that they acquiesce. Depending on the dynamics between the subjects and the moment, Richard will make two to four photographs of them, each in different poses.  The entire process usually taking ten minutes or so.

The results convey a wide range of physical responses of connecting to a stranger through touch. Everything from an arm stiffly resting on someone’s shoulder with the hand held up so as not to completely touch, to tender touches and soft eyes, to just under the surface sexuality.  And so much more.  These are those types of photographs that give up something new each time you look at them.

The final photobook of 65-70 portraits will be published by the Aperture Foundation in the Spring of 2014. A Kickstarter campaign was created to fund the project and ends on August 5.

Image credits: Photographs by Richard Renaldi and used with permission