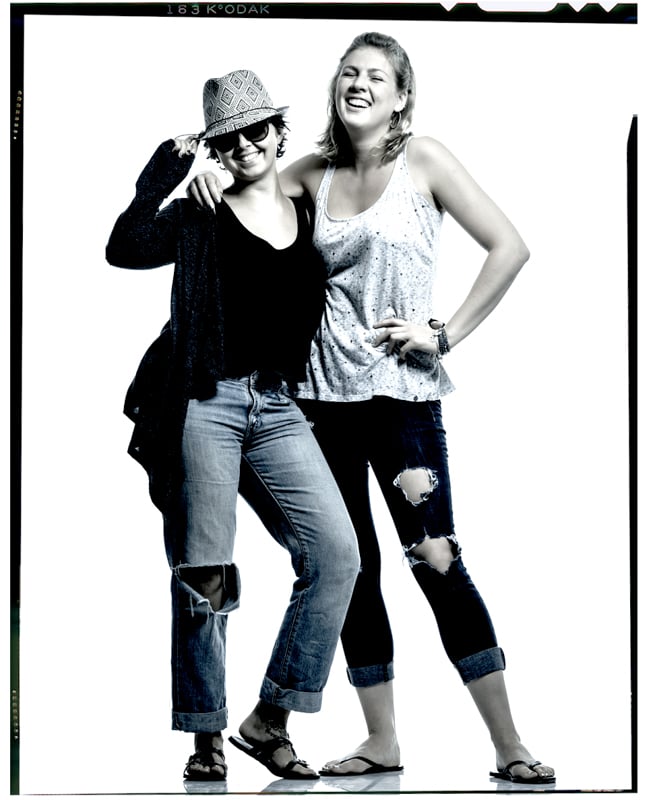 Let me say this right at the outset. This is not another high and mighty rant against cell phone cameras, Instagram, “art” filters, Lightroom presets, etc. You’re not about to read another gripe about everything that photography has become in the twenty-first century, even though I was afraid that’s what it would sound like when I started writing this.

To illustrate the worn-out parable I like to use to explain why my nose is always in such an elevated orientation whenever I talk about Instagram, I even recruited two of my students, Sarah and Jackie, to dress up in their finest worn out jeans for me. I wanted to create my own edgy little filter effect, complete with a 4×5 Ektachrome film edge so that you would all think that I am a fine art purist who never crops my work. I’m not, but I do like to tell stories, so here goes… 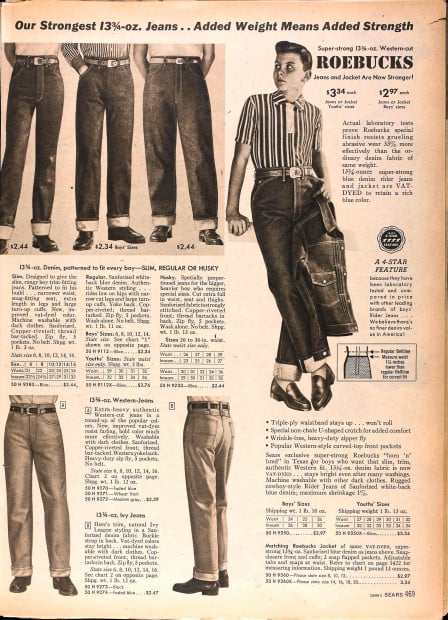 Those of us of a certain age remember what blue jeans used to be like. Worn right off the rack, they appeared to be made of some sort of ballistic cotton that could stop a small-caliber rifle round, and were so stiff that we couldn’t bend our knees in them for the first few weeks. We bought them six inches too long because, of course, they would shrink when first washed and because they would last so long that we would “grow into them”.

But we loved our jeans. We mourned their loss when, years later, time and Tide inevitably reduced them to a series of holes held together by mere threads.

Jeans used to be a journey, not a destination; a promise, not a product. In the way they shrank, faded, and eventually ripped and disintegrated, they reflected the accumulation of our life’s adventures, our authentic experience.

But like so much else in our post-modern smorgasbord of infinite choice and empty meaning, fashion jeans have traded the journey for the destination, the promise for the product. We want our jeans, and perhaps by extension ourselves, to look like they’ve been somewhere without the inconvenience of actually having to go there. We want them to look that way NOW and at whatever cost. With our fashion jeans, we are buying our own back story.

That’s how I have always regarded the manufactured character of Instagram and its kissin’ cousins. Authenticity seems to have become aspirational instead of just a state of being that exists for no other reason than that it can’t exist any other way. Sound familiar?

I usually get my head handed to me every time I go down this road, so don’t bother telling me I’m an idiot. As I’m about to show you, I have someone in-house who reminds me of that on a regular basis.

A couple of weeks ago, my significant other and I climbed Mount Washington in New Hampshire. Jenny is a highly accomplished designer as well as a very talented amateur photographer. All the way up those 6,288 feet, she shot pictures with her iPhone and posted them to Facebook. It was fun, because it was almost as if our friends were making the hike with us (without the inconvenience of having to break a sweat, come to think of it…) But I shot my RAW files with a high quality point and shoot camera, a Canon G11, and processed them later. 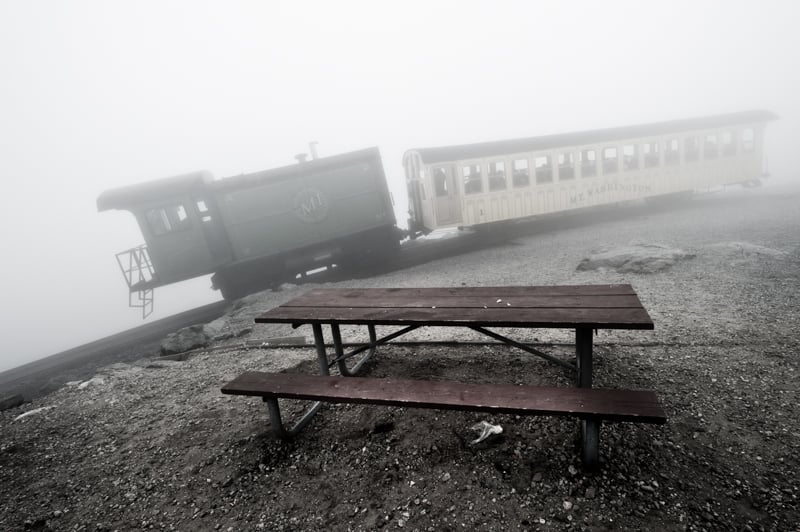 After nearly five hours of steady uphill trudgery, we reached the rocky summit in a driving microburst of rain and hail. Luckily, the highest mountain in the Northeastern US is a popular tourist trap as well as a rugged backcountry destination. We found facilities and a number of exit strategies to get off the mountain safely. Ninety dollars scored us the last two downbound spots on the most unique option, the kitschy Mount Washington Cog Railway.

Driving back to our hotel about an hour later, Jenny shot a picture through the windshield of the car as rain pelted the glass. She pushed and poked at it for a few minutes on the screen of her iPhone, then held it up for me to behold. 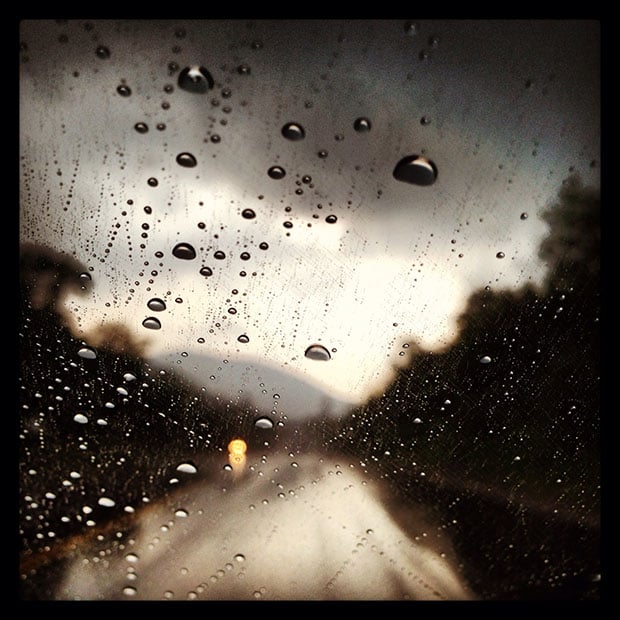 “Check this out” she announced.

“Is that Instagram?” I asked carefully, fearful of what I was about to step in.

“It is. Kinda looks like I shot it with a Holga, doesn’t it?”

“Well, it sort of looks like that, soft and vignetted at the edges… I guess one question I would ask myself is, ‘do I want to make my digital images LOOK like they were shot with a Holga, or do I want the experience of actually SHOOTING with a Holga?’ For me, it’s always been the latter.” 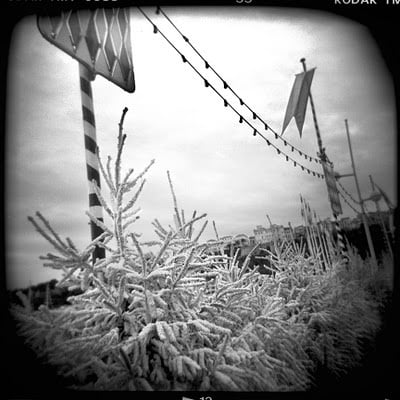 Then I gave her the little speech on the subject that I’ve repeated so many times. I should have known better.

“I’ve always tried to make the point with my students that a Holga is the ultimate ‘point and pray’ camera. It delivers no guarantees but lots of surprises, exactly the opposite of what should be coming out of your digital camera or your phone. A Holga image looks the way it does because it just can’t look any other way.”

“Now, to my pea brain at least, that is a whole lot different than taking an extremely high quality digital image (which, incidentally, also looks the way it does because of the tool that made it) and running it through a software filter designed to make it look like something it isn’t. Pictures shot with a real Holga and with a Holga filter in Instagram both have character, maybe even similar character, but from a process standpoint (and process is really what this all comes down to) one is what it is and the other is what it isn’t. Or it is what it wants to be, not what it has to be…” 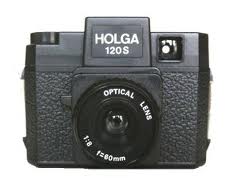 “You’re an idiot” she said. “And I’m not one of your students, so don’t even start. That’s a cool shot. It’s two-thousand-freaking-thirteen, old man. Who cares how I made it?”

“Oh, please. Just drive.” We rode in silence the rest of the way to the hotel, which gave me some time to really think about the whole thing.

And suddenly, I saw her point. She’s right. It’s two-thousand-freaking-thirteen. Who cares how we make our pictures nowadays?

The problem is, this old man remembers a time (and it wasn’t all that long ago) when being a photographer meant being both an artist and a craftsperson as well as a technician. We didn’t have Facebook or Flickr or Instagram, so if we wanted to show or share our work we made tangible things called prints. Any “style” we lent to our work resulted from the premeditated effect of light and chemistry on a sensitized surface.

Many thought that what some of us made was a representation of truth, many others disagreed, but few could argue with the fact that what we made was true. It reflected the nature of our tools, our materials, our process, our level of commitment and our intellect (or lack thereof). Can we say the same about being a photographer in the digital age?

At the risk of sounding like a hypocrite as well as an idiot, I believe the answer is “YES”.  All one has to do is to look carefully at the parallels between any number of turning points throughout the history of photography and the truly remarkable work that is being produced today using both traditional and cutting edge techniques and technologies, including cell phones and Instagram.

For instance, in the early decades of the twentieth century, avant-garde artist and photographer Man Ray and other proponents of the anarchic art movement Dada were willing to throw out any convention as a rejection of war, conservative politics, capitalism, art elitists, and just about everything else. In doing so, they managed to prove that anything is art and nothing is art, while at the same time unintentionally instigating big new aesthetic shifts.

Seen in that light, could all those porkpie-hatted hipsters be on to something, pointing their iPhones and Instagram filters at anything and everything and their middle fingers at those of us who went through our own cool fads like leisure suits, disco, Bee Gees tattoos and Polaroid transfers? I mean, Dada led to the Surrealists, for crying out loud, and disco led to the Sex Pistols! Who knows where the eventual rejection of hipsterism might lead us? 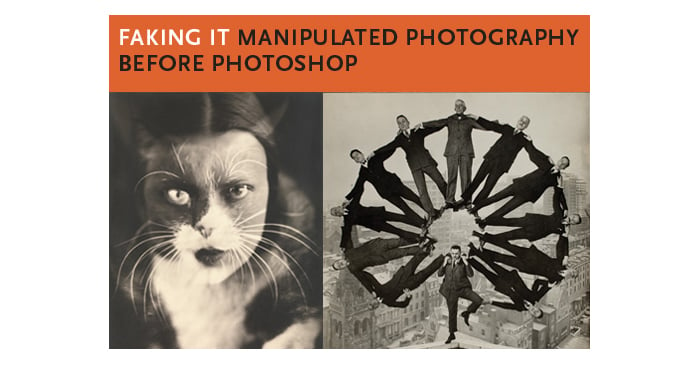 Faking It, the astonishingly enlightening survey of pre-Photoshop image manipulation published last year in conjunction with the Metropolitan Museum of Art’s same-named exhibition (sponsored by Adobe, interestingly), puts the topic into historical context and the notion of photographic “purity” to rest, maybe even once and for all. In the words of one reviewer, “the old adage ‘the camera does not lie’ is one of photography’s great fictions”.

We’ve always said that it doesn’t matter what kind of camera one uses to make a photograph. We’ve always said that there’s no such thing as an unmanipulated photograph. Was Ansel Adams, previsualizing his photographs with multiple spot meter readings (only to then dodge and burn the living daylights out of them in the darkroom) really all that different than his friend Jerry Uelsmann postvisualizing his with multiple enlargers?

A quick look at Jerry’s work while flipping through the pages of Faking It makes today’s Photoshop gimmickry look more like a logical evolutionary step forward, and less like the revolutionary lurch into a no-holds-barred future we used to think it was. The book even presents Adams’ iconic Moonrise Over Hernandez, NM both in its raw and “performed” state, proving once again that even one of the widely perceived purest of purists always pulled out all the stops to execute his vision.

Folks will come down on either side of this debate over whether too many photographers, amateurs, artists and pros alike, try on different pushbutton prepackaged effects the same way they might try on different pairs of intentionally worn out jeans. “Does this filter make my butt look cross-processed? It doesn’t? How about this one?” To me, though, the whole thing feels more like fashion than photography, and that’s a fickle footrace I’ve always chosen to watch from the sidelines.

But even though Instagram and its offshoots have blurred the line between brilliance and BS like it’s never been gaussian blurred before, great photography across all genres has never been greater than it is right now. Great photography has always been a very, very small subset of the total volume of work produced. Everything else has always been just that– everything else.

But those Instagram pictures sure do look cool, don’t they?

I should go now. My new jeans are in the dryer.

Behind the Scenes with Pro Skateboarder Turned Photographer Arto Saari