Last month we shared a couple videos showing how it’s a bad idea to ask professional golfers to aim at your camera — there’s a good chance you’ll end up with shattered glass and a pricey camera repair bill.

Unfortunately, the same thing can sometimes happen even if you don’t intentionally put your camera in harms way. ESPN found that out at the British Open today after a golfer accidentally smashed one of its $80,000 high definition cameras.

The video above shows what happened after Danish professional golfer Thomas Bjorn tried to hack a ball out of the rough. After capturing the swing and the ball sailing into the air, the camera suddenly shakes and becomes hazy. The ball had shattered the lens: 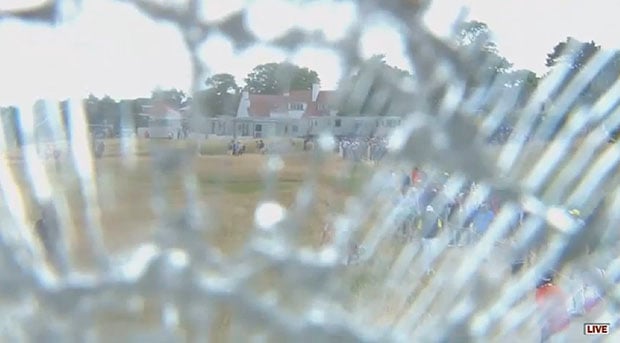 Photographs of the shattered camera gear were soon shared through Twitter:

The Open Championship is live on ESPN, and we've already lost one camera to an unfortunately placed golf ball: pic.twitter.com/ljO9ZzbD2s

ESPN’s Mike Tirico later commented on the air that the camera was worth a whopping $80,000 — no word on whether the damage was limited to a filter or lens.