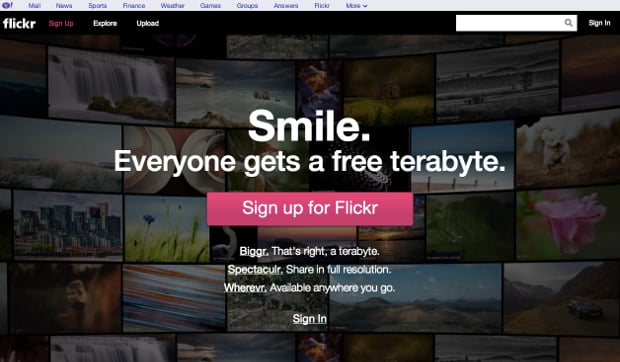 Yahoo can’t seem to catch a break where Flickr users are concerned. Just as everyone is coming to terms with the redesign that stirred a bit of an uproar on the Flickr forums, the company has introduced a new toolbar at the top of every page that has users upset yet again.

The new toolbar is similar to the Google toolbar you’ll find on the top of every one of its sites: it links to other pieces of the Yahoo! network such as Sports, Weather and News.

But for Flickr users who value their screen real estate, the change is an unwelcome one. Even photographer Thomas Hawk, who was an outspoken supporter of the new redesign even as the Flickr forums were bursting with complaints, has come out against the toolbar on his blog, calling the links “advertisements.”

According to CNET, the bar has actually been in the works for several months. Initially deployed to a select number of users as a “bucket test,” Yahoo watched as negative feedback poured in, but ultimately decided to go ahead with the change anyway.

In response to the criticism, Yahoo’s Thea Lamkin attempted to explain how this would be a positive change, “The idea is to make it easier to access other places in the Yahoo! network and make visiting Yahoo! pages a more seamless experience,” said Lamkin. “This also lets your photos benefit from a wider audience.”

Lamkin also explained that there is no official way to turn the toolbar off, so unless Yahoo goes back on this change, it looks like Flickr users are stuck with it.

To learn more and maybe read some of the feedback Yahoo has been getting regarding the new toolbar (fair warning: some of it is downright ugly), head over to the Flickr forums by clicking here.