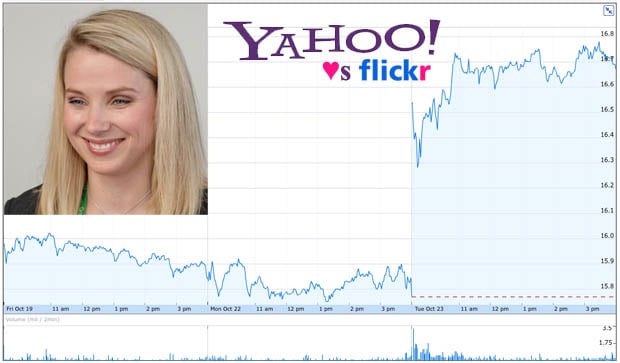 Yahoo CEO Marissa Mayer held her first earnings call yesterday, and it appears that stockholders were pleased with the company’s latest quarter figures: the stock price has been soaring since then. Among the areas that Yahoo sees promise in are Flickr and mobile, as well as a combination of the two.

TJ McCue over at Forbes writes that Yahoo has revived Flickr:

In late August, the company released a new Flickr for Android app which has gotten healthy reviews and downloads. It isn’t Instagram, but then, neither is Flickr. Despite seeing a home page change that moves the Flickr link to the far left navigation panel, there is a definite focus on consumer apps and content, where Flickr has a large following. Many felt that Flickr was getting the short end of the proverbial stick over the last few years, but Mayer certainly sees the mobile future and Flickr is a big part of it.

We released an updated version of Flickr for Android, which has been getting rave reviews from our end users, including thousands of 5-star ratings.

[Yahoo’s new strategy is] continuing to invest and really rejuvenating our investment in the key verticals where we already have a leadership position: Finance, Sports, News, Flickr, many of those; and really getting very focused on the shift to mobile.

Flickr currently has 51 million registered members, so it’s definitely a solid starting point for Yahoo as it tries to take its services mobile.

Facebook has just reported major profits and growth in mobile, so don’t be surprised if we begin seeing Flickr heavily investing in this front.

P.S. As a side note, apparently Yahoo is no longer featuring Flickr on its front page…