You’ve had a rough day, you’re bone tired and ready for bed. What would feel better than cuddling up with an image of some anonymous dude in a Superman outfit?

Yeah, I can think of a couple million things, too. But apparently there’s a market for body pillows emblazoned with images of comics fans dressing as their favorite characters. The legal and ethical framework for selling them, however, is a different matter. 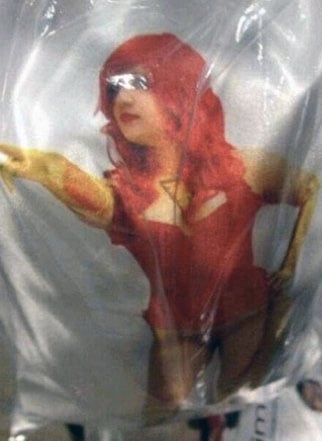 2ImageSolutions (Web site offline) has agreed to stop selling the pillows after a number of “cospaly” enthusiasts complained that their likenesses were being used without their knowledge. Sort of.

The company’s business revolves around setting up booths at comic conventions to shoot 360-degree images of cosplay folk eager to show off their costumes. The assumption was that the images would then be used for custom print jobs, in particular the near life-size pillows, ordered by the person photographed.

But it seems there are plenty of folks happy to cuddle up with a complete stranger, and 2ImageSolutions started selling pillows to whoever wanted one, much to the creepiness of the portrait subjects. Subjects who did sign fairly comprehensive model releases, but…

“His (2IamgeSolutions’) legal rights are highly questionable at best, but his moral rights are non-existent,” Superman portrayer Dustin Dorough tells i09. “Even if he had an iron-clad model release (which he doesn’t), selling these images on pillows without telling the models is despicable. Even if these aren’t ‘body pillows,’ they are still pillows. Something that goes in someone’s bed. I’m sure many costumers would be severely creeped-out having their pictures on something of this nature. It’s simply not right to do that without talking to them about it. Prints are one thing, while pillows are another entirely.”

While not acknowledging any legal liability, the company says it was only trying to market its, err…unique services and won’t sell to the public anymore:

We would like to assure participants that any pictures of them that we have taken WILL NO LONGER BE SOLD AT OUR BOOTHS OR AVAILABLE TO THE GENERAL PUBLIC. The products will be available ONLY to those of whom the pictures were taken. Any future products will be special-order so that the attendees will be able to order prints and merchandise of themselves and themselves only. We would like everyone to know that their privacy is of utmost importance to us and that we did not intend to violate their privacy in any way.

(via Lindwood Knight via i09 via PopPhoto)