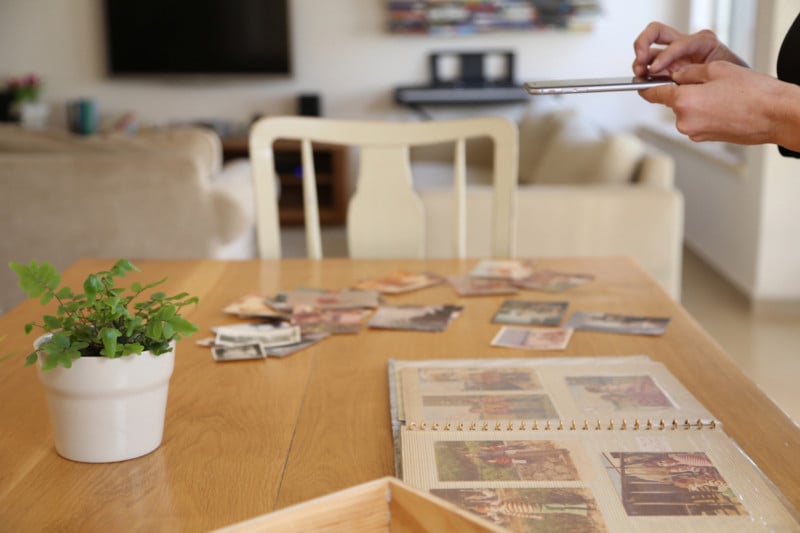 Photographers are always telling each other to print their photos, but at the same time, services keep springing up that let you do the exact opposite: digitize your prints. Photomyne is one of these services, a feature-rich smartphone app that lets you turn your old prints into digital files faster than anything else out there.

Earlier this week we covered the release of one of Photomyne’s competitors, Unfade. Both are photo “scanning” apps that use your phone’s camera to digitize old prints, and both can automatically enhance those “scans” to help restore old photos. But that’s where the similarities end and Photomyne’s strengths start to show.

Here’s a quick intro to the app:

As you can see, one of the major differences is sheer efficiency. With Photomyne you don’t have to “scan” one image at a time: you can flip through photo albums page by page or lay out several shots on a desk and “scan” them all in a single shot.

Yes, this will lead to a drop in scan quality, but if you’re using your phone to quickly digitize old prints, you’re probably not worried about ultra-high quality copies anyway—in other words, the quality loss is probably acceptable when you consider the time saved. But speed isn’t not where the feature set ends. According to TechCrunch, an update due out in a few weeks will up the ante a bit further, bringing features like collaborative photo albums and cloud-only backup into the equation.

If social sharing is the main reason you’re digitizing your files, Photomyne has a pretty robust set of sharing features too, including integration into Facebook’s timeline so you can properly place images into your past on the social network timeline straight from the app.

Finally, the app also boasts a “discover” feature that lets you share your old photos with the wider Photomyne community if you so choose. This section features an Instagram-like feed of old photos that Photomyne co-founder Yair Segalovitz tells TechCrunch will soon be filterable by location and theme. 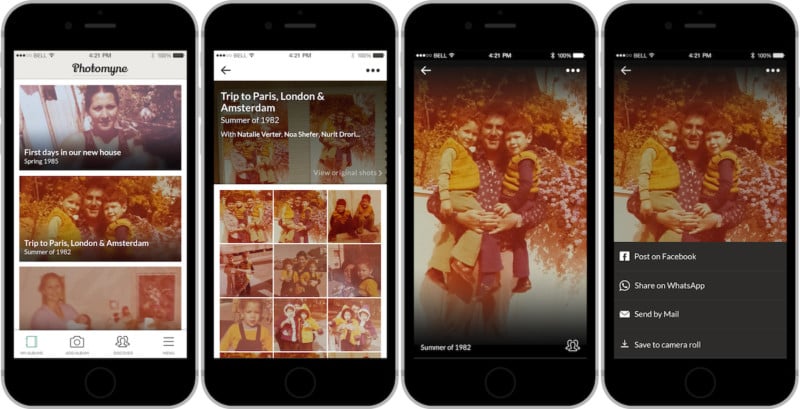 Currently available on iOS with an Android version coming “soon,” Photomyne is doing pretty well for itself. The company just closed a $2.6 million seed funding round, and the app has already amassed over 900,000 users who have scanned over 14 million of their old photos since it launched just 9 months ago.

Like Unfade, however, the app is not free. You can either download a free version with in-app purchases or a $5 paid version. But neither of those is the “premium tier”; for that you’ll have to pay a subscription of $12 per year to unlock features like unlimited saves & backup and desktop access to your photos.

To find out more about Photomyne, or if you want to try it out for yourself, head over to the app’s website by clicking here.