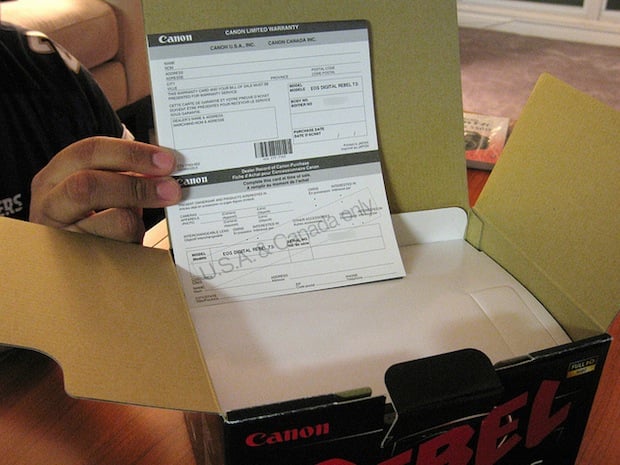 Installing custom firmware on your DSLR is becoming more and more standard. Like jailbreaking an iPhone, the new firmware often offers much more customization and features you couldn’t otherwise have. Magic Lantern in particular has been on a rampage lately, unlocking RAW video in cameras as cheap as $500.

But before you jump on the bandwagon and install Magic Lantern on your Canon or Nikon Hacker on your Nikon, it would probably be a good idea to get in touch with those companies and find out if installing third party firmware voids your warranty. Thankfully, Udi over at DIY Photography did it for you. In an attempt to answer this yet unasked but very important question, Udi sent emails to Canon, Nikon and Panasonic asking them if installing third party firmware (Magic Lantern, Nikon Hacker and Ptool, respectively) on his 5D Mark II, D7000 and GH2 would void the companies’ warranties.

Each company eventually got back to him, though some took more prodding than others, and it looks like Canon owners are the only ones who are in the clear. Here’s a snippet of the email he received from Canon:

There is no such thing as “voiding” the Canon warranty, there are simply repairs that are covered, and those that are not.

For instance, the repairs for a failure of the buttons on the back of the camera within the warranty period, on a camera that does not show any evidence of mishandling or misuse, would likely be covered. Repairs for a camera that is “bricked” or otherwise having issues directly related to using a third party firmware would not be covered.

Even if a camera had to have the main board replaced due to it being “bricked” by a third party firmware, and then at some point later (but still within the warranty period) the buttons malfunctioned, the same rules still apply. So damage caused by Magic Lantern wouldn’t be covered, but any covered damage, whether or not you’ve ever installed ML before, will still be taken care of pro bono during the warranty period. Nikon and Panasonic owners, however, aren’t as lucky.

Thank you for contacting Nikon, I’ll be more than glad to assist you. Using a firmware version from an unknown source will void your warranty.

Yes, if you do proceed to use this option your warranty will be voided. We hope this information is helpful to you. Thank you for contacting Panasonic.

There are many reasons why a company might choose to void your warranty if you use a third party’s firmware, but Canon’s policy still seems to make the most sense. If you run into a manufacturer defect, it seems right that the manufacturer cover the repairs, even if you chose to use third party firmware on their camera. That’s just our take though.