I focus on a relatively obscure (though rapidly becoming more popular) area of photography called gigapixel-resolution photography. I use a robotic panoramic mount to capture tens if not hundreds of images of the same location and then stitch the images together to create a single massive photograph. I’ve combined this technique with High Dynamic Range imaging to create HDR photographs that are anywhere from 200 megapixels to 4 gigapixels in resolution size.

In 2011 I was commissioned to create a large format print of the skyline of Manhattan for a financial investment firm in downtown NYC. To get the shot, which I planned to be an elevation-level, 200+ degree view of the city, I scouted a location in Weehawken, NJ on the bank of the Hudson river facing East.

The first attempt was, for the most part, a disaster. I climbed up to the shore of the river and set up my rig. It was about 2/3 PM in the afternoon, so the light was fairly unspectacular and it was freezing out. In addition, the Charthouse in Weehawken juts out into the river, so a complete, unobstructed view of the city was difficult, if not impossible. The fact that city ferries and cargo ships are also using the river means that a perfect stitch, where the water is flat and seamless without waves breaking up the image, was also not very likely without heavy post processing in Photoshop.

At some point between my third and fourth panoramic sweep of the city (each sweep consisted of about 70-80 images and 3 exposures of each; ~200 photos per shot), a city ferry flew past about 100 feet off the shore and the resulting wave broke on the rocks I was on, soaking both me and my photography equipment in near-freezing Hudson river water. Luckily, none of the gear was damaged, and I was honestly quite thankful that neither myself or my equipment was knocked into the river. I decided to refocus my efforts and return for the shot another day.

The second attempt was less rough-and-tumble, though ultimately no more successful. I called the manager of the Weehawken Charthouse beforehand and asked if I could use their back deck as a platform to shoot from. They agreed, so I drove out there around magic hour (about 4-6 PM on the east coast at this time of the year), and was able to shoot from the back porch of the Charthouse. At this hour, the sun is setting in the west and the east-facing view is receiving a lot of sunlight. Despite the decent hour and the better vantage point, the shot itself was pretty unremarkable. In addition, I still faced the issue of busy, rush-hour ferries traveling back and forth between the panoramic vista and interrupting the otherwise smoothness of the water and the shot in general (i.e., taking a picture with half a ferry in the shot will ruin the picture, and multiple exposures of moving objects do not play well in HDR, resulting in ghosting effects)

On my way home from the Charthouse that night, I decided to take a detour in Hoboken to try and find additional locations to shoot from. The issue with the Charthouse was the lack of control over the location; they are only open certain hours, making a morning or late night shoot impossible.

In Hoboken I found a pier that was under construction that jutted out into the water and provided a completely unobstructed view of the city. After I finally found what I considered to be the perfect location to shoot from, I actually ran back to grab my gear and setup the camera for a nighttime gigapixel-resolution HDR photograph (As an aside, I challenge anyone to come up with something more difficult to shoot competently than a nighttime gigapixel-resolution HDR photograph– the wind at night, long exposure times, etc make this exceedingly difficult), and ran off another 1-2 exposures before the battery in my robotic panoramic mount died completely.

The nighttime stitch was decent, but still not the spectacular image my customer was looking for. After later recounting my unsuccessful attempts with my father, he actually suggested that the best time to go would be with the sun rising, rather than setting. I wasn’t sure about this–the sun rises behind the city skyline view facing the east, and would essentially just back light the city. That said, ‘the salvation of photography comes from the experiment’ (Laslo Moholy-Nagy), and as such I was more than willing to attempt the shot again.

The following weekend, on a Sunday after Thanksgiving, my dad (an amateur photography buff himself) accompanied me at about 5-6 in the morning on the shoot and we drove out to the pier in Hoboken. We actually arrived just before dawn, as a massive cruise ship was slowly drifting down the East River. I should mention that if you’ve never seen a cruise ship juxtaposed to the city of New York, it’s pretty spectacular. There were not a lot of clouds in the sky, which we had actually hoped for to provide contrast and great sunrise colors from the back lighting provided by the sun. Because of this, both my dad and I agreed I was probably going to have to return and re-attempt the shot, which after this many attempts I was committed to perfecting. 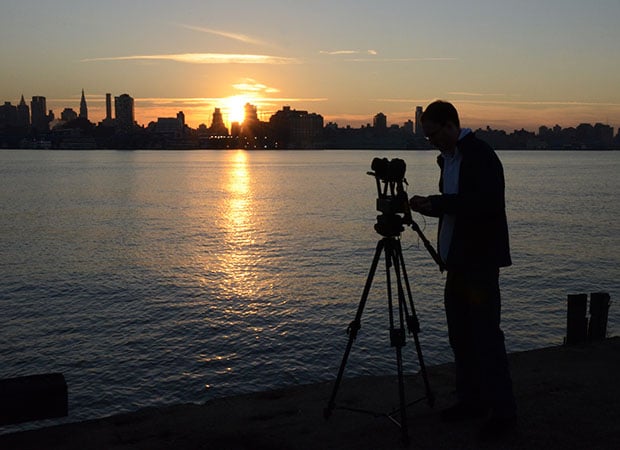 After the cruise ship docked, the river was almost completely still, like glass. I was able to get about 6-7 solid panoramic sweeps of the skyline, taking them throughout the course of the sunrise. After the last panorama, my dad went to grab the car and I fired off one more exposure, taking all 210 total photographs (5 rows x 14 columns x 3 exposures) in about a 5 minute span of time. 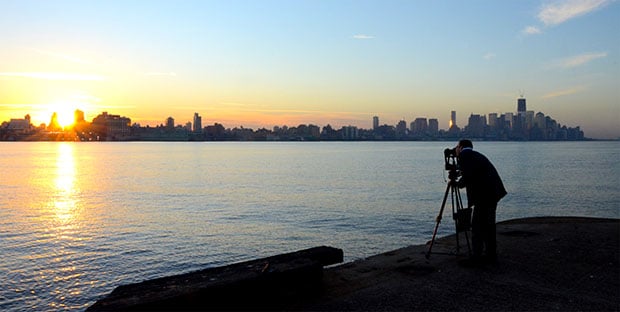 The resulting ~250 megapixel HDR stitch took about 2-3 days to assemble. I employed a new technique of post-processing; whereas before I would process the HDR exposures individually and then stitch them into a single panorama, in this case I stitched three independently-exposed panoramas and assembled them into a 16-bit HDR photograph that could be tone-mapped as the completed stitch.

With a result I was actually happy with in hand, I toned the production image and ran off a 16″ x 80″ giclee print on metallic paper (ed. 1 of 6), which was then dibonded behind borderless 1/8″ plexiglass and hand-delivered to the client’s midtown office on 5th Avenue (click the photo to see a larger version):

Final validation came when I brought the print in to the photo finishers- the owner of the store looked at it and said ‘Oh, Peter Lik?’ to which I responded: ‘No, mine.’

About the author: Jay Hirschfeld is a photographer based in New York. Visit his website here. This article originally appeared here.

Entire Story Told Through Reflections in an Eyeball

16 Things Photo Hipsters Did To Improve the World of Photography