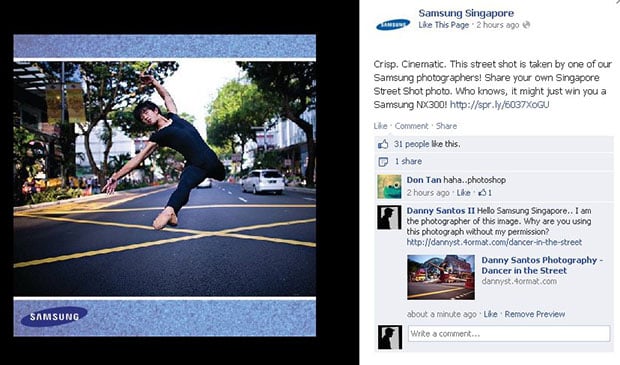 Samsung found itself in an embarrassing copyright infringement controversy earlier today after the company published a street photographer’s work without permission as an advertisement on its Facebook page. It wasn’t just the unauthorized use of the image that was embarrassing; here’s the kicker: the photograph was actually shot using a Nikon camera.

The hoopla started when Orchard Road, Singapore-based “weekend photographer” Danny Santos II noticed this image shared on Samsung’s Facebook page with the text, “Crisp. Cinematic. This street shot is taken by one of our Samsung photographers! Share your own Singapore Street Shot photo. Who knows, it might just win you a Samsung NX300!”: 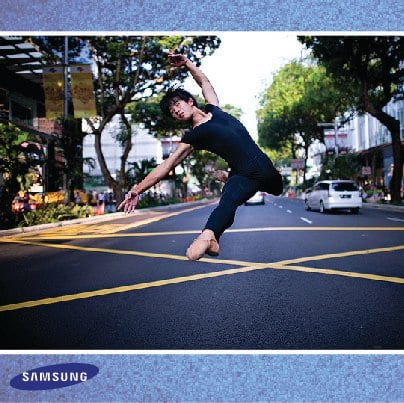 Santos then posted on his own Facebook page to protest the infringement, saying, “What the hell.. one of my photographs is being used by Samsung in their FB page without my permission.” That post received hundreds of comments, likes, and shares, and began making the rounds on the web.

Here’s the original photo the advertisement used (here it is on Santos’ website): 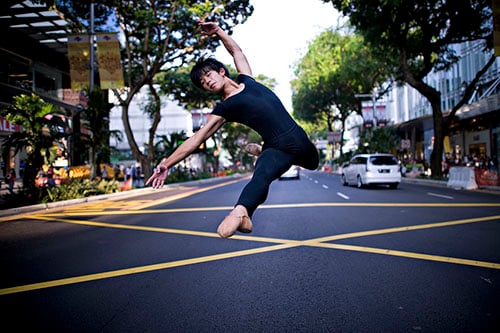 A quick peek at the EXIF data reveals that it wasn’t captured with a Samsung mirrorless camera at all, but rather with a Nikon D700 DSLR: 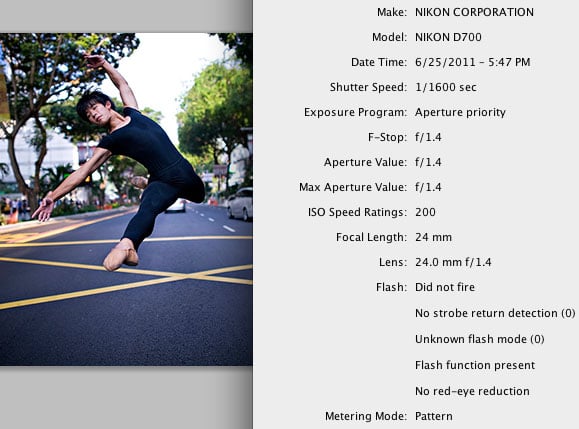 To Samsung’s credit, the company took quick and public action rather than stay quiet or try to cover up the mistake. About an hour after Santos’ post, he received a call from Samsung that said the company was investigating the matter. Apparently one of the photographers that had been commissioned to shoot with the NX300 had submitted Santos’ photograph to the marketing agency running the promo.

After a few more hours, the company apologized to Santos’ and updated their original Facebook post with this statement:

We sincerely apologise to photographer Danny Santos. The photograph in question was mistakenly uploaded while an agency was helping us prepare for this online campaign. We have reached out to Mr. Santos to explain what had happened and are now working on rectifying the situation.

We always respect all copyright laws and expect our agencies to do the same. We are taking this incident very seriously, and will work on making our processes more robust to prevent similar incidents from happening again.

We’re guessing that’s the last time Samsung will be publishing submitted photos as advertisements without checking the EXIF data in the images.

Thanks for sending in the tip, Alexander!

Peter Belanger: The Man Behind Many of Apple’s Iconic Product Images

We’re Hiring! PetaPixel is Looking for New Rockstar Bloggers to Join the Team