The Peregrine Falcon, also known as the Duck Hawk (a fact you won’t soon forget after watching this video), is a spectacular bird of prey. Claiming the title of fastest member of the animal kingdom, a Peregrine Falcon can reach speeds in excess of 200mph during its characteristic high-speed hunting dives — take that cheetah.

In the video above, YouTube user drhodie‘s falcon Dora happens to have a camera on her back as she performs one of these dives and takes an unsuspecting duck in mid-air. 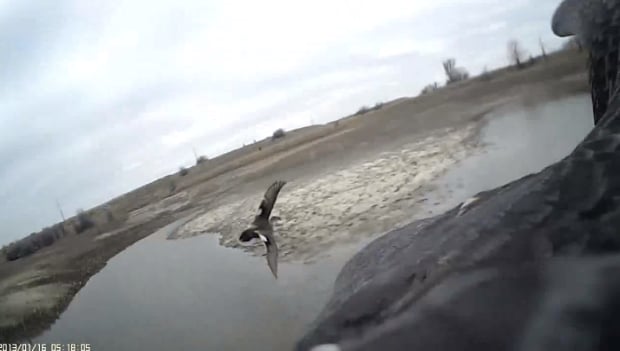 Dora is a Peale’s/Anatum Peregrine, making her a cross between the largest subspecies of the group and the standard American Peregrine Falcon. She is also female, which makes her much larger than the males of her species.

In addition to her incredible speed, Dora’s eyesight is also mind-boggling. Because Peregrine Falcons have two foveas (the part of the eye responsible for sharp central vision), one of which is shaped like a telephoto lens, Dora can see her prey from as far as 6 miles away.

In other words: the duck didn’t stand a chance.