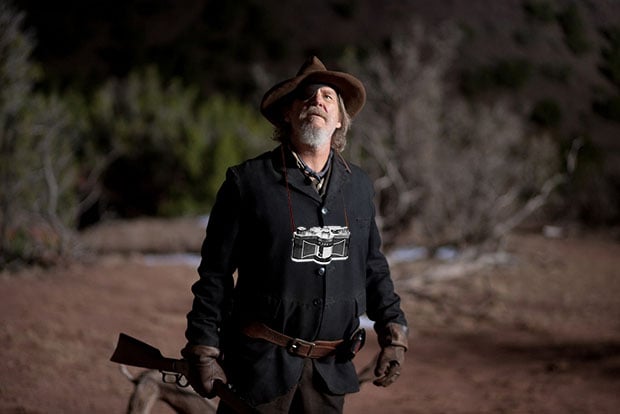 Actor Jeff Bridges has been nominated for six Academy Awards for his work on the silver screen. In 2010, he walked away from the award ceremony clutching a statuette after winning the Best Actor prize for his role in Crazy Heart.

When he’s not playing various characters in front of a camera, Bridges is well known for his interest in being behind the camera. He often serves as an unofficial behind-the-scenes photographer on Hollywood movie sets, documenting what things look like from an actor’s perspective.


Bridges writes that his interest in photography first started during high school, when he set up his own personal darkroom and fell in love with “developing and printing for hours and hours, listening to FM radio in the red ‘safe light’.”

After getting in to acting, Bridges shelved his photography hobby until 1976, when he played paleontologist Jack Prescott in the remake of King Kong. The fact that his character carried a Nikon everywhere rekindled Bridges’ interest, and he started taking pictures again.

The hobby finally joined him into the world of acting in 1984, during the filming of the movie Starman. While on the set, co-star Karen Allen suggested that he take pictures to create a photo book for the cast and crew. This was the beginning of Bridges’ privately published photo albums from the sets of Hollywood movies.

Bridges is often seen on movie sets snapping away with his Widelux F8 panoramic film camera. He uses the 35mm version with a 28mm lens that pans nearly 180 degrees. Instead of a traditional shutter, the camera uses a slit that exposes the film as the lens pans.

He was first exposed to the camera back in high school during class photographs. Bridges’ classmates would take advantage of the panning lens by running across the frame in order to show up in the resulting photograph twice. After picking up the camera himself, Bridges fell in love:

The Wide-Lux is a fickle mistress; its viewfinder isn’t accurate, and there’s no manual focus, so it has an arbitrariness to it, a capricious quality. I like that. It’s something I aspire to in all my work — a lack of preciousness that makes things more human and honest, a willingness to receive what’s there in the moment, and to let go of the result. Getting out of the way seems to be one of the main tasks for me as an artist.

Bridges’ photographs are shared through his personal website, and many of them were published in a 2003 photo book entitled, “Pictures: Photographs by Jeff Bridges.”

Update: Bridges was honored on May 1st, 2013 with an Infinity Award by the International Center of Photography. Here’s the video that introduced Bridges:

You can see more videos introducing all the other winning photographers here.

Photographer Captures a Battle Between Killer Whales and Sperm Whales