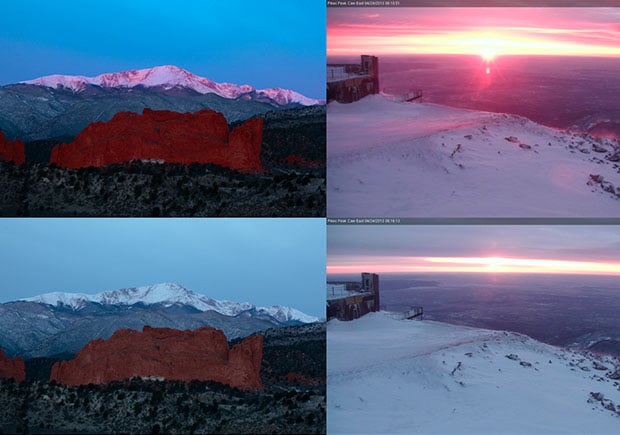 There is no shortage of landscape photographs of mountains at sunrise on the Internet, but how often do you get to see photographs captured at the same time from the mountain’s perspective? Photographer Todd Caudle (‘Cloudman‘ on 500px) was able to capture these two viewpoints simultaneously yesterday morning by shooting with both his personal camera and a live webcam located at the mountain’s summit.

Caudle tells us that he’s a “webcam junkie”, and that he often lives vicariously through livestreaming webcams when he can’t be out and about with his camera.

Of the webcams located in his home state of Colorado (his favorites), he particularly enjoys looking at the ones placed on the summit of Pikes Peak by his city, Colorado Springs.

These cameras offer a “commanding view over the city and the plains beyond,” he says. The mountain is 14,110 feet high and rises over 7,000 feet above Colorado Springs.

Checking the webcams is often helpful to Caudle for planning for his landscape photos:

Sometimes I’ll even check it well before sunrise to see if I can see city lights, indicating whether or not the summit might be poking through a low cloud bank that I might be able to get above. My favorite conditions for landscape photos are when there’s upslope pushing clouds against the Front Range along Colorado Springs’ west side, because there are a few strategically placed roads that I can take to get above the soup. There’s nothing more majestic than seeing the mountain that inspired the writing of “America the Beautiful” rising out of a sea of clouds at sunrise.

Yesterday, Caudle got up early in the morning and set up his camera at one of his favorite spots in the Garden of the Gods. When the “first blush of alpenglow” began to paint the summit of Pikes Peak in pink hues, he began snapping photographs. To document the sunrise that was causing the colors on the peak, Caudle pulled up the summit webcam feed on his phone and began capturing screenshots of it at the same time as his photographs.

When he returned home, he matched up his photographs with the simultaneous views captured through the webcam, and placed them side by side in a collage (larger version here): 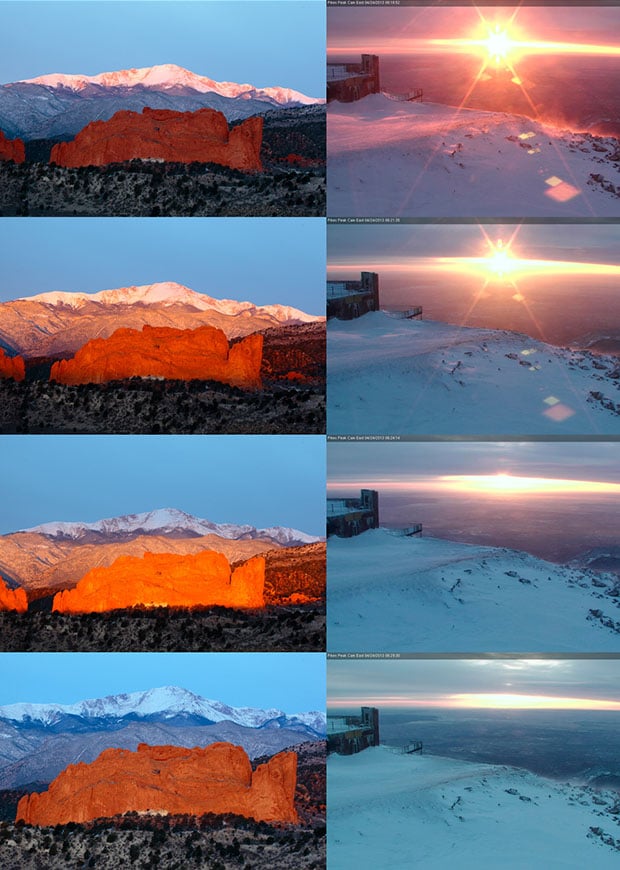 It’s like a “behind-the-scenes lighting view” for landscape photography!

Image credits: Photographs by Todd Caudle and used with permission