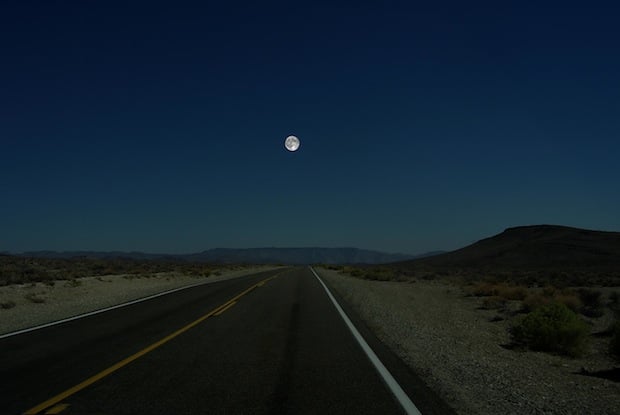 In the past, we’ve shared some interesting experiments that photographers and artists have done, imagining what our photos would look like if something were to be drastically different about out planet or solar system. Today, we’re adding another one to that list.

We’ve shared NASA’s prediction for what will happen to the night sky in 3.5 billion years when the Milky Way collides with Andromeda; we’ve shared what landscape pics would look like if Earth had Saturn-like rings; we’ve even shared a video that showed the night sky with planets replacing the moon.

Unfortunately, that last one was missing a few contenders, so today we’re sharing a similar project by artist Ron Miller. He took a regular old landscape photograph and replaced the moon with each of the planets in turn.

Here’s what that landscape shot would look like if we were to replace the moon with the planets, from smallest to largest:

Interesting side note: Miller actually took the original photo in Death Valley during the day, and altered it in post to make it look like it was taken at night. He also created each of the planetary illustrations (including the moon) himself, rather than using actual planetary photos.

Of course, if this were to magically happen IRL, we would have more pressing things to worry about than how our pictures would look. For instance, Jupiter would subject us to mass amount of deadly radiation, and that’s not even taking into account issues with the tides and gravitation. Still, it’s a fun thought experiment that we’re glad will never go any further than that.

(via iO9 via Photojojo)

Image credits: Illustrations by Ron Miller and used with permission