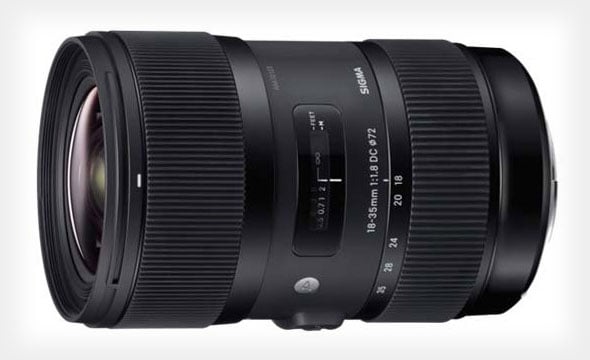 Could an f/1.8 fixed aperture appear inside an 18-35mm zoom lens? That’s what photographers on the web are now debating after the emergence of a pair of photos that appear to show a not-yet-announced Sigma 18-35mm f/1.8 lens.

Having a f/1.8 aperture on a zoom lens like this is unheard of, and Sigma would be breaking new ground if this lens does in fact materialize.

Officially, the lens is reportedly called the Sigma 18-35mm f/1.8 DC HSM. The photos and specs first appeared on Czech photo site Digiarena before being picked up by Photo Rumors.

Here’s the second photograph of the lens: This lens would be unlike anything we’ve ever seen before. It’s said to be designed for crop factor APS-C DSLR cameras, and reportedly has 9 aperture blades, ultrasonic autofocus, a 72mm filter size, a minimum aperture of f/16.

Its weight is reportedly 810 grams, and it measures 121mm long. By comparison, Canon’s 24-70mm f/2.8 weighs 953 grams and measures 124mm long. This new lens would be both lighter and smaller than Canon’s lens, even though it opens up more than one full stop wider.

Sigma has been doing quite well with its lens lineup as of late. It’s new 35mm f/1.4 rivals the build and image quality of its big name competitors, yet costs hundreds of dollars less.

The brand has been developing quite a positive reputation for itself, and this new 18-35mm, if real, would do wonders for the company in that regard.

P.S. Does anyone know if it’s some kind of Czech April Fools’ Day today?