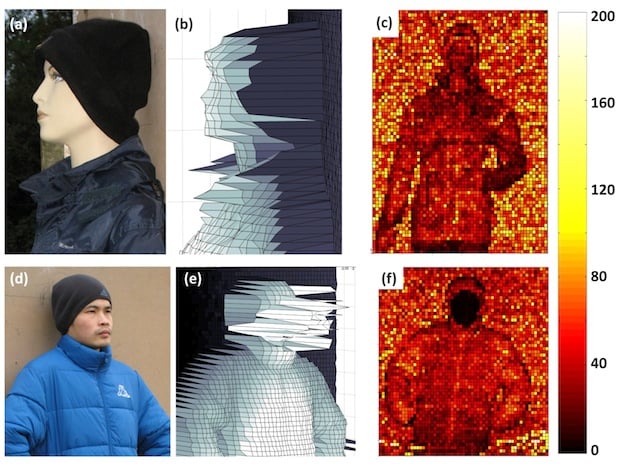 A team of researchers at Heriot-Watt University in Edinburgh have developed a new laser camera system that can take extremely precise 3D depth scan images from up to a kilometer away (0.62 miles). An impressive advancement in laser imaging, the camera uses a low power infrared laser beam to create 3D images precise to the millimeter.

The camera is sort of like a laser-based “radar,” in that it uses time of flight to determine the object’s distance from the sensor and create a highly precise 3D scan from that data. The system scans an object with an infrared beam from over half a mile away, and then uses its extremely sensitive detector to measure how long it takes the photons to travel back. When we use the term “extremely sensitive” we’re not exaggerating, the system’s detector can sense individual photons. So even though the camera is often scanning objects that scatter laser light every which way, all they need is one photon to reflect back towards the detector. The system can then recreate the a millimeter-accurate image pixel-by-pixel.

The system’s only major flaw is that it can’t get an accurate reading on skin. Don’t want to be scanned? Just get naked … problem solved (sort of). Because of this limitation, the scientists aren’t sure what they want to do with the camera system. But assuming they find a suitable purpose for it — and several have been suggested — they’re confident they can extend its range to 10 kilometers (6.2 miles) and make it fully portable within five years.

For all the nitty gritty scientific details, head over to the University’s website by clicking here.