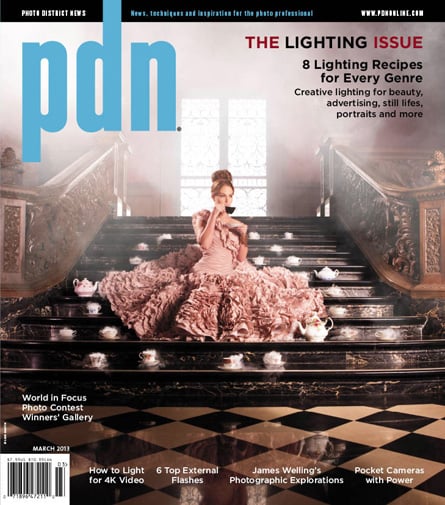 In PDN’s March issue, the magazine highlighted Cade Martin’s impressive ad work that he had done recently for Tazo Tea and Starbucks. As the main feature, it’s only natural that one of those images ended up on the cover of the issue (pictured above). Not everyone, however, was as thrilled by Martin’s work as PDN.

Photographer Rodney Smith has covertly spoken out about the cover on his blog. In a post titled “The Real Thing,” he calls the image an imitation, and wonders why PDN would choose to applaud work that is, as he puts it, “by it’s [sic] very nature ‘second-rate.'”

Here’s the cover next to Smith’s “Real Thing”: 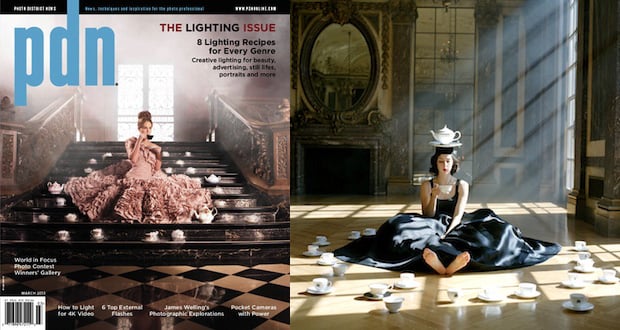 We say “covertly” because the post doesn’t actually mention PDN directly, although the connection is fairly obvious. Smith’s side of the story is that Martin’s image is a clear imitation of one of his. Anticipating PDN’s reply, he maintains that even with the multitude of content out there, imitation is not inevitable:

I realize that there is always much in life to imitate and the urge to do so is enormous, yet I also realize that to be original one has to look deep within themselves and find what no one else can copy, a very private voice.

Often this is difficult and painful and requires a self-awareness that many people do not have or want. But if one speaks honestly and to thine own self be true, they too may find a way to be their own real thing.

Mentioned directly or not, the magazine’s editors didn’t hesitate to respond to the accusations in a post of their own. After explaining that Smith reached out to them privately via e-mail, they go on to say that, in our image flooded world, there really is no such thing as pure originality in photography:

Inventing new photographic material whole cloth, without reference or regard to the models of the past – from Rembrandt to the latest photography show – is nearly impossible in photography, and it would produce aridly self-referential work

Even though nobody is threatening law suits, the back and forth between PDN and Smith has still managed to stir up an interesting conversation amongst photographers: where does one draw the line between inspiration (or even imitation) and infringement?

It’s not a new debate — Sony was allowed to recreate a photo by photographer Donald Harney for their movie, while Andy Baio’s 8-bit tribute to Miles Davis never made it to court — but this most recent case has certainly raised the question once again. We’d love to hear your take.

Service Turns Your Photos Into Authentic Tintypes and Tintype Pendants