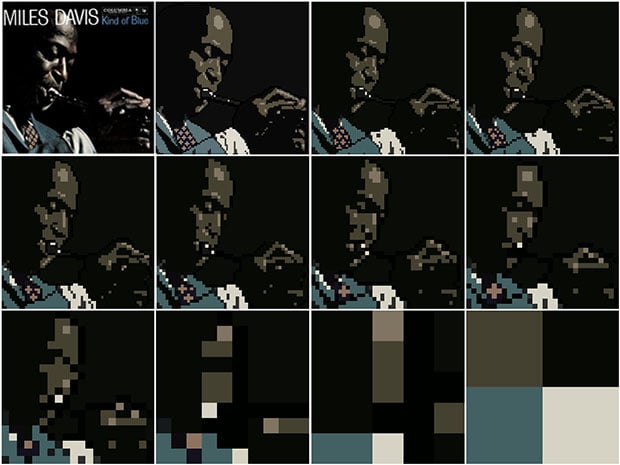 In 2009 Andy Baio of Waxy.org — founder of Upcoming.org and former CTO of Kickstarter — created Kind of Bloop, an 8-bit tribute album to the best-selling jazz album of all time, Kind of Blue by Miles Davis. While Baio meticulously licensed all the music he used to create the album, he released a pixelated version of the original album cover (top, second from left) without licensing it, believing it was different and low-res enough to be considered fair use. He was then sued by the photographer, Jay Maisel, who “felt violated to find his image of Miles Davis, one of his most well-known and highly-regarded images, had been pixellated […]”.

Although he maintains that his use of the image didn’t violate any copyright, Baio decided to settle out of court, paying Maisel $32,500 to avoid an expensive battle in court. He published a blog post today voicing his thoughts on this ordeal and on the topic of fair use. After discussing some criteria that define fair use, he writes,

In practice, none of this matters. If you’re borrowing inspiration from any copyrighted material, even if it seems clear to you that your use is transformational, you’re in danger. If your use is commercial and/or potentially objectionable, seek permission (though there’s no guarantee it’ll be granted) or be prepared to defend yourself in court.

Anyone can file a lawsuit and the costs of defending yourself against a claim are high, regardless of how strong your case is. Combined with vague standards, the result is a chilling effect for every independent artist hoping to build upon or reference copyrighted works.

He also published the above images, asking where the line should be drawn between copyright infringement and fair use. It’s an interesting thought experiment. Looking at the most pixelated image, which is literally four colored squares, it’s hard to believe anyone would consider it a violation of the photo’s copyright. If that’s the case, then at which pixelation step does it become fair use?

Kind of Screwed (via Boing Boing)

How to Add a Vignette Using Photoshop

Disposable Camera Captures Its Own Trip Across the United States