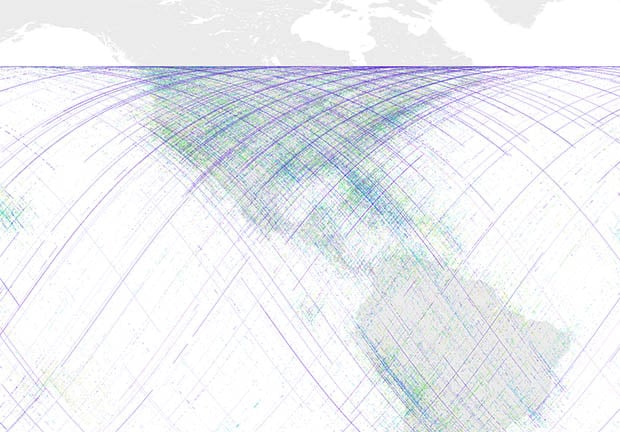 Since NASA’s first mission to the International Space Station back in 2000, astronauts on board the artificial satellite have snapped over 1.1 million photographs. What’s neat is that every one of those photographs is available to the general public through a giant online database.

Open source rocket scientist Nathan Bergey decided to use his coding skills to do a little digging through the image archive, and ended up creating some beautiful visualizations showing where the images were shot in relation to our planet.


Using a custom Python script, Bergey scraped the geodata of 1,129,177 photographs. He then decided to draw every one of those locations on a blank canvas with photos showing up as red pixels. What resulted is this map of Earth created entirely using astronaut photography EXIF data (click the photo for the full-res version): For a second way of viewing the data, Bergey decided to divide up the points by mission, assigning a different color to each mission and then plotting out the points that way: 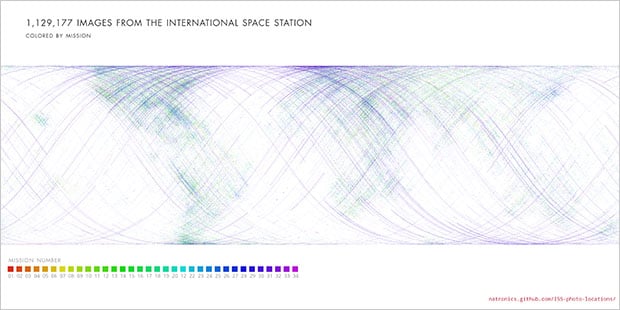 He then added a giant map of Earth under the points to see where the shots were actually snapped in relation to our planet: 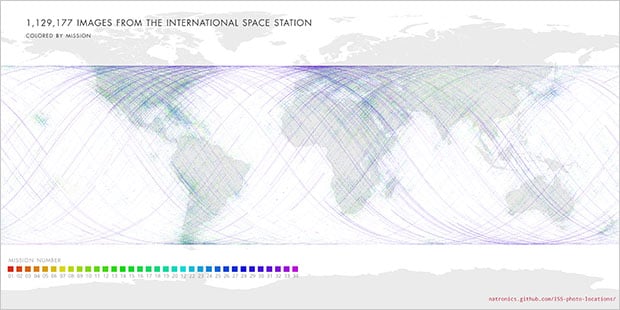 We see that the space station stays very strictly within certain latitudes of Earth as it zips around our planet. Bergey says it’s high enough that it can communicate with ground stations based in Russia, but low enough that NASA can launch vehicles to it from the United States.

See those purple lines across the map? Those are time-lapse sequences shot by astronaut Don Pettit!

Bergey also plotted individual geodata maps for each of the ISS’ 34 missions, showing that some of the missions focused heavily on photography, while others were mostly quiet on that front:

Here’s a breakdown of the number of photos snapped during each of the missions: 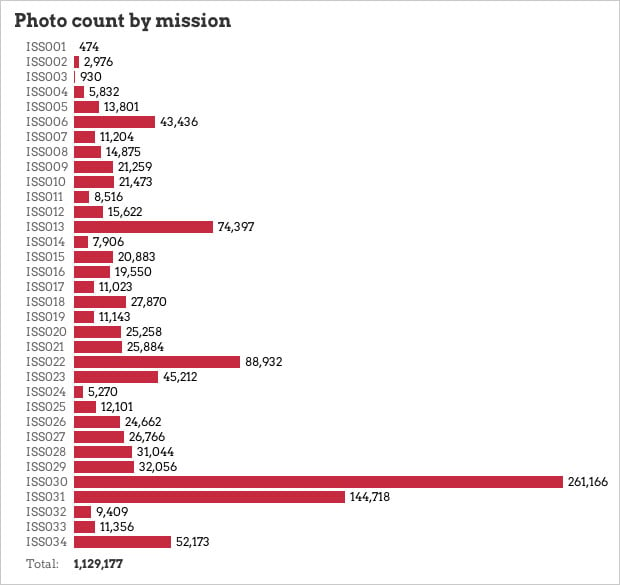 Guess which missions Don Pettit was a part of? Yup: Expeditions 30 and 31.

Here’s a compilation video by Bruce W. Berry Jr showing some of the time-lapse sequences that led to the solid streaks of points in the later Expeditions’ maps:

If you’d like to play around with the dataset yourself, you can find the necessary files here. You can also take a look at data.nasa.gov to check out all the other datasets you can dive into.