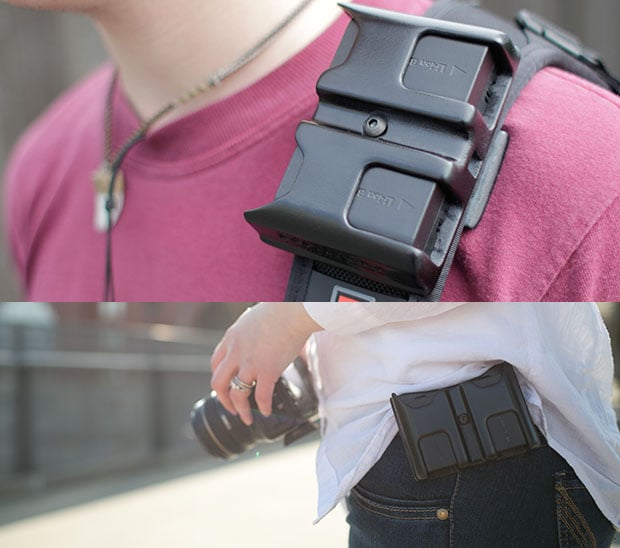 Holsters are becoming pretty popular for keeping camera gear on your hip and at the ready, and now Washington-based gear company Rhino Camera Gear wants to bring the concept to batteries. It has unveiled a new product that’s designed to cut a few seconds out of the time it takes you to switch out empty batteries for fresh ones.

The accessory is called the Rhino Battery Holster, and moves your juiced batteries from inside your camera bag to your side.

Each hard shell holster holds two LP-E6 batteries (yup, it’s designed for Canon shooters for now) and has a belt clip that allows it to be attached to pants, belts, backpacks, and straps.

The back of the holster also features a brass insert that lets you attach a carabiner, which makes the holster attach-able to pretty much anything.

In terms of securely holding the batteries you stuff in them, each holster has an adjustable tensioner that lets you lock down the batteries as tightly or as loosely as you’d like.

Rhino Camera Gear is currently taking preorders for the Battery Holster over on Kickstarter. You’ll be able to snag a single holster if you contribute $25, or two of them for $40.

Photographs of the Poor Filipino Children of “Smokey Mountain” in Manila