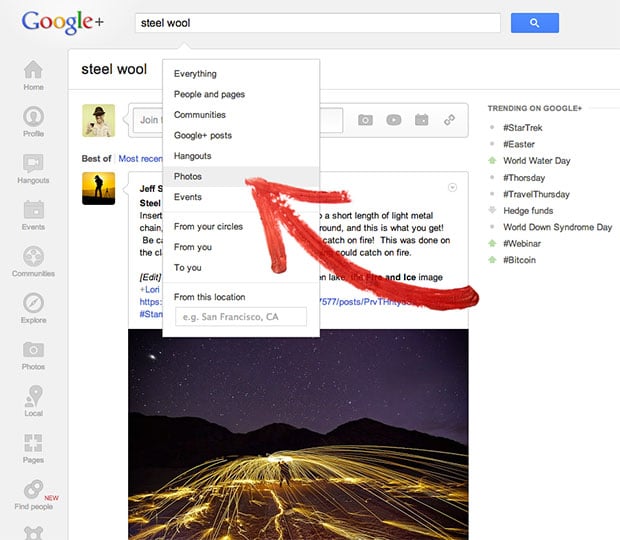 Facebook announced its photos-only news feed filter earlier this month (alongside a major News Feed revamp) at a major press event surrounded by much fanfare. Now, Google has followed suit with its Google+ social network — albeit much, much more quietly.

The service unveiled a new photos-only feed today, but instead of holding a major press event about it, it was outed by Google engineer Dave Cohen through his Google+ page.

Cohen writes that you can now “filter your Google+ search results to only show photo posts.” Simply type any search term into Google+, and then you’ll find a new “Photos” option in the filter dropdown menu.

Results can include both photos shared with you from your friends and family, to public photos shared by other photographers on Google+.

Here are some sample search terms that’ll give you an idea of what the filter is like: long exposure, steel wool, and cartoons.

So far it looks like the feature is only tied to the search functionality, but it seems likely that it may soon be rolled out as a simple filter feature on your Google+ home page. It’s great news for photographers looking for inspiration, bad news for Facebook and competing photo-sharing services.

(via Dave Cohen via CNET)

The Armadillo Camera and Other Wacky Camera Creations