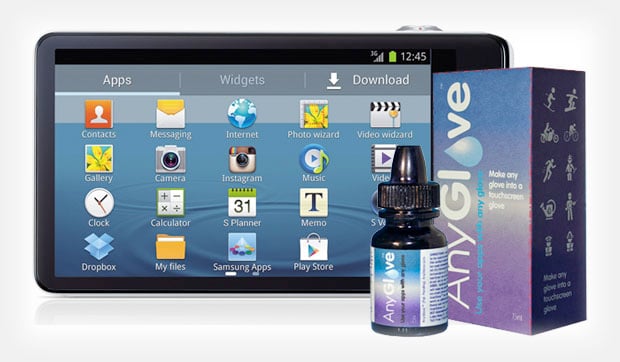 More and more cameras are being launched with touchscreen interfaces these days, especially as mobile operating systems are starting to appear in point-and-shoots and turn them into smartphone look-alikes. For those of you who live in a colder environment and often find yourself wearing gloves that aren’t compatible with touchscreen cameras, there’s now a way to make those gloves touchscreen compatible that doesn’t involve sewing conductive thread into them.

It’s called AnyGlove, and is a special capacitive gel that can be applied to — as the name implies — any glove or clothing item.

The product comes in a bottle containing enough liquid for 550 drops, which is enough to treat several pairs of gloves. The gel works on most types of gloves, including work, fleece, running, wool-lined, driving, and cycling gloves. A slight caveat, though: the company warns against using it on very light-colored gloves, as it will cause a slight dark discoloration.

It’s not a permanent treatment, but a single application can last for months depending on what your gloves are made of and how often you’re rubbing them up against a touchscreen. Once the touchscreen powers begin to fade, simply drip a little more liquid onto your fingertip to restore the full potency.

Here’s a short video review by Red Ferret, which found that it does work (albeit after a number of coatings):

A bottle of the stuff costs $20 over on Amazon, around the same price as a nicer pair of touchscreen gloves.

(via RedFerret via Boing Boing)

Long-Exposure Photos of a Sleepwalker Under the Stars