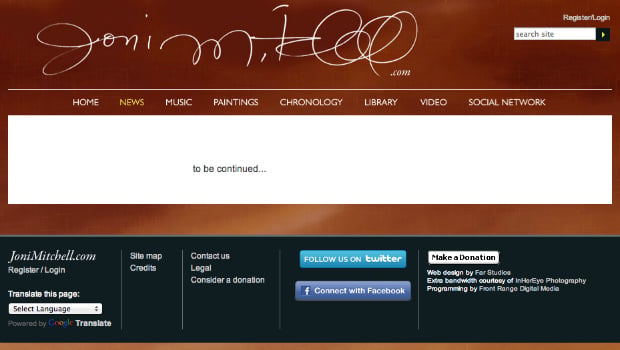 Les Irvin, the man behind the biggest Joni Mitchell fan site on the internet, is being sued by celebrity photographer Charlyn Zlotnik over four photos that were uploaded anonymously in the comments section of his website.

Although Irvin immediately removed the photos once he was notified of the infringement, Zlotnik and her lawyers have not backed down, leaving him little in way of options. In a cry for help, Irvin — who cannot afford to pay out the $25,000-$600,000 Zlotnik is suing him for — has now reached out to the internet through his website and Facebook, asking for support:

Here’s an excerpt from that page, which has since been taken down and replaced by the message “to be continued…”:

Until now. Charlyn [Zlotnik] has refused to drop the case … A $25,000-$600,000 payment out of my pocket spells the end of a lot of things for me personally – including, obviously, the end of JoniMitchell.com.

I’m not asking for your money, but I am asking for your help. If you have been enriched at any point by the treasure that is JoniMitchell.com, if you choose to see this resource as a benefit and a service rather than as an attempt to defraud and infringe, and if you feel this situation is unfair… please help me by sending an email to the attorneys and the photographer Charlyn, Leslie, and Carolyn – asking them to drop the lawsuit. Or if you agree with them, give them a thumbs up instead!

Copyright law seems to be clear that, by removing the photos in an “expeditious” manner, Irvin is not liable for the infringement. However, assuming Zlotnik’s lawyers don’t see fit to drop the case, Irvin will have no choice but to either pay up, or incur thousands in legal fees to make this point.

Thanks for sending in the tip, Kevin!

Calvin and Hobbes Photoshopped Into Photographs of Real Locations