On Friday, February 15th, 2013, near-Earth asteroid 2012 DA14 did a flyby of our planet — the closest approach ever of an object of its size (30 meters in diameter). Photographer Colin Legg of Western Australia decided to capture the close pass in a time-lapse video, and set up his cameras after midnight around 220 miles east of Perth.

He ended up capturing the amazing video above, while captures a shooting star burning a trail across the sky while DA14 slowly travels through the shot. The video also shows how much random stuff in the sky you can see if you have eyes/cameras sensitive enough to see it.

To create the video, Legg set up a 5D Mark II and a 6D: one with a 24mm lens and one with a 50mm. The 50mm was set at ISO8000, f/2.2, 8s, and 9s intervals. The shooting star passed overhead at 3:24am, and both of the cameras managed to catch it in the act. Legg says that the trail migrated across the sky over the next few minutes.

Here’s the first photograph Legg captured that showed the meteor’s orange-ish debris (you can find a higher-res version over on Legg’s Facebook page): 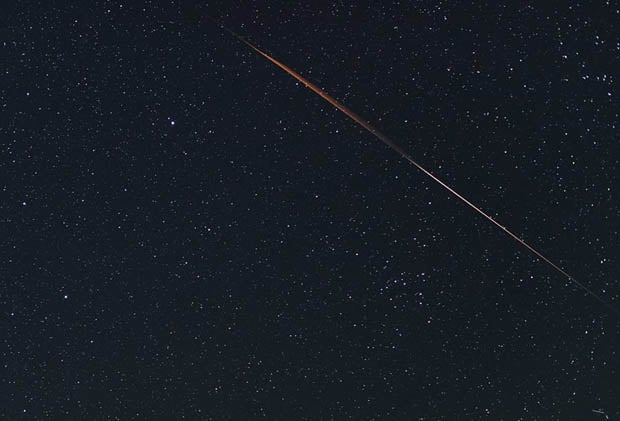 Asteroid 2012 DA14 can be seen in the video traveling from top down on the left side of the frame. All the other stuff you see zipping around the frame in the video consists of man-made satellites.

If Colin Legg’s name rings a bell to you, it might be because we featured his work just a couple of months ago. In December, we featured a time-lapse video he shot showing a total solar eclipse sweeping across the Australian landscape.